The average Kenyan business enterprise does not grow to see her first birthday. The difficulty in accessing credit, high taxation and stiff competition from established enterprises all conspire to strangle the newborn before she masters her baby steps. Yet, despite the odds, many young Kenyans, like eagles, fly into the storm buoyant.

Elvis Saoke, the 33 year old of Saoke Destinations is one such a man.

Trained in airports operations and customs clearing and having previously worked at Davis and Shirtliff, interned at Kenya Airports Authority and researched at Kenya National Bureau of Statistics ,Saoke decided  in February 2018 to venture as an entrepreneur. This was after harboring the thought since 2013 and also doing some part-time logistics work for several tour operators to earn some side cash.

“When you have been blessed to have a client list like celebrated Kenya Rugby 7s star Collins Injera, afro-pop band Sauti Sol and Big Ted who is the State House director of brand, strategy and events not to mention a couple of corporates, it gives you morale to march on seeing their satisfaction,” he quips with a grin.

Nine months later, he has experienced the ups and downs of the tourism industry and he looks forward ready for the challenge. “A calm sea never made a skilled sailor,” he says. Well aware of the seasonal nature of the business as the Kenya is heavily reliant on foreign tourists, he seeks to stand out. June to July is the peak tourism season as most guests visit to experience the wildebeest migration. The season extends towards early January capitalizing on the December holidays then the off season kicks in around January to March and the cycle continues to June.

Running Saoke Destinations from Sonalaux House Moi Avenue Nairobi, Saoke believes that the Government and especially the Ministry of Tourism have not done much to highlight Kenya’s tourist destinations.

“We have scenic areas in Western Kenyan like Takawiri Island famous for its sandy soil and beaches, Kit Mikayi, Ndere Islands and Ruma National Park that government can help expose. We must stop the over reliance on traditional tourism destinations like the coast and focus on the whole country. This way, the sector creates jobs in those areas and it cushions the industry overall from overreliance,” he says. 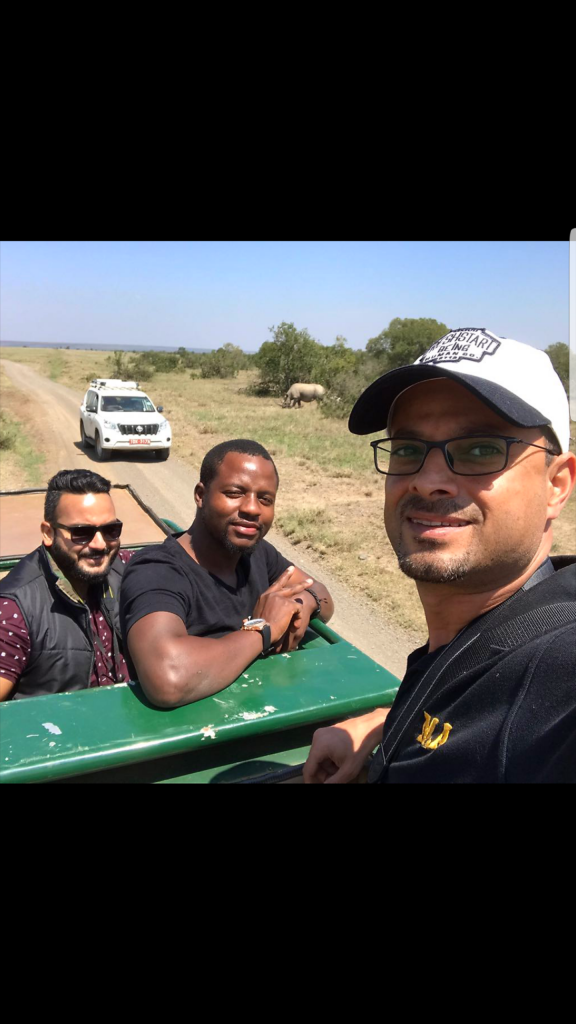 With Sh30, 000 from his personal savings during employment; Saoke was able to get started for his business. Registered the company and further sought annual registration with Tourism Regulatory Authority (TRA) which cost him Sh8 000. TRA registration is useful as it enables you to be recognized by the Kenya Tourism Board. He also advices joining one of the several tourism unions as they enable a collective bargaining deal for the tours operators.

Asset finance to procure automobiles for his tour company is at an advanced stage. This, he says, is the most difficult task is to attract financing especially in a country where banks have squeezed credit to private sector with the capping of interest rates. A bank will loan you money but expect regular repayment even during off peak season. For a start, Saoke has partnered with a trustworthy fleet owner who avails him vehicles on signed agreement from 14 seaters to mini vans for the excursions.

Just like any other business, stiff competition is everywhere and ingenuity is key to staying afloat and relevant. Saoke strives to open up tourism destinations at quite affordable rates. Saying that with as low as Sh1000 a Kenyan can visit places like Hells Gate, he admits that there exists a perception that you need quite a huge sum of money to tour the country. They also have easy installment plans for clients who want to save over time for their dream excursions.

Team building for institutions is also carried out and Saoke Destinations offers professional photography too. It is all about diversification and offering quality services that will attract and maintain clients, he says.

Saoke Destinations has diversified and will help you plan for your wedding and honeymoon. He hails the stability currently experienced in the country and says it is very instrumental in ensuring the tourism business remains vibrant. Tourists love to travel in areas that are secure.

The company has two permanent staff with the rest of the services outsourced. Erick Saoke himself is the aggressive owner who lays hands on approach to the business; he aids the administrator in the day-to-day operations of the tours company. They have a very reliable team builder whom they engage on need basis.

The industry itself does come with its fair share of challenges like the recently highlighted train tickets scandal by some established tour operators. In the expose carried out by a local daily, Daily Nation, some established tour operator are guilty of purchasing and hoarding all train tickets especially towards the peak Christmas season and other operators have to get them from these operators at prices even as high as 50% more.

“Let the hawk perch, let the eagle perch, and if one tells the other not to perch may his wing break.” Saoke quotes Achebe as he urges the government to rein in hard on such malpractice and level the playing field. This, he says, will bring competition and thus the tourists will benefit from better pricing in the available packages making it attractive to many Kenyans to travel.

The gig, just like every other business has its on challenges. Saoke remembers bitterly when he was just setting himself up in February when an organization he provided transportation to and from an event failed to pay. This eventuality brought bad blood between him and the friends who had leased him the vehicles since they demanded payment even though he had not been paid himself. He has sued the organization for a breach of contract. While you are still new in the game, he advises, try as much as possible to guard your business against such exploitation.