Cover Story
BY DAVID ONJILI Job losses and unemployment are always a good barometer for a country’s economy. In Kenya, the job sector can be classified into the formal sector and the informal sector.  I delve into the formal sector scenario especially the manufacturing sector because as a nation we have experienced severe job losses and minimal job creation. It is also worth noting that close to 800,000 graduates join the job market annually. This is evidenced by the unemployment figures, which have risen from 12.7% in 2006 to 40.2% in 2016 according to Kenya National Bureau of Statistics. The Government is putting up a brave face, insisting that jobs are returning, giving the return of assembly of VW Polo Vivo cars at Kenya Vehicle Manufacturers (KVM) in Thika as an example. However, importing the cars as Semi Knocked Down units creates no jobs. KVM is sending staff home. The Government must wake up to such realities and look into her policies that stagnate jobs creation opportunities and also mitigate on why many investors are heading to Ethiopia, Rwanda and Tanzania and not Kenya. From the table below, courtesy of a survey done by Anzetse Were, a regional development economist published in August 2016 titled Manufacturing in Kenya: Features, Challenges and Opportunities, it is clear that while Kenya boasts of the largest and most sophisticated manufacturing sector in East Africa in terms of growth trends over the past decade, other East African countries like Ethiopia, Rwanda and Tanzania are way ahead of us. Most East African countries are laying most emphasis in building labour intensive manufacturing industries to help ease the unemployment burden. Ethiopia for example is creating industrial parks and making land available while Kenya on the other hand does not seem to be going this direction. 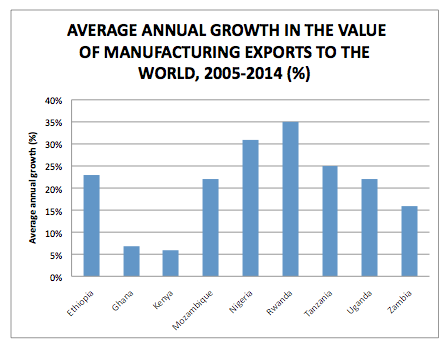