Money
Weak oil and commodity prices over the past two years have led to foreign-currency shortages in numerous Sub-Saharan African countries. Oil-exporting nations have been particularly hit, since government foreign-exchange reserves have been severely depleted. In response, countries such as Angola (B1 negative) and Nigeria (B1 stable) have rationed supplies of foreign currency to their economies, causing shortfalls for banks and businesses. Dollar scarcity has also weakened local currencies. A stabilisation in oil and commodity prices over recent months will help to defuse the pressure. We forecast oil prices will remain between $40-$60 a barrel through 2018, compared to lows of $26 in early 2016. A recovery in foreign-currency liquidity, however, will depend upon continued higher oil prices and production and it will take time for sovereigns, banks and corporates to restore their financial health. Managing foreign-currency liquidity will remain a key policy challenge for Sub-Saharan oil exporters. Dollar rationing, currency devaluation and foreign-currency borrowing by governments have stemmed the fall in foreign-exchange reserves in Angola and Nigeria. 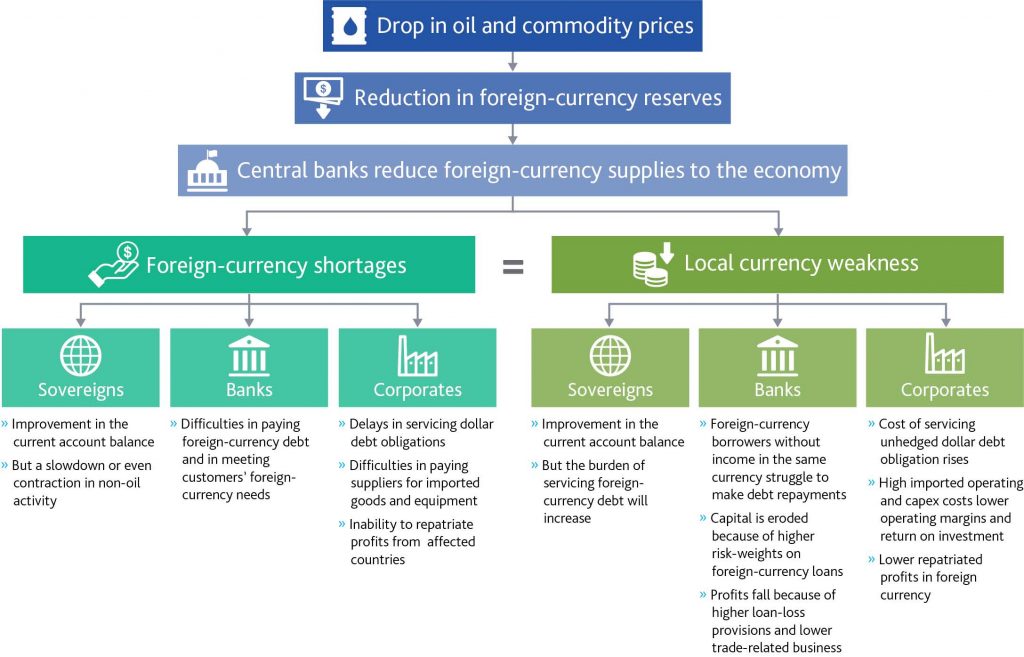 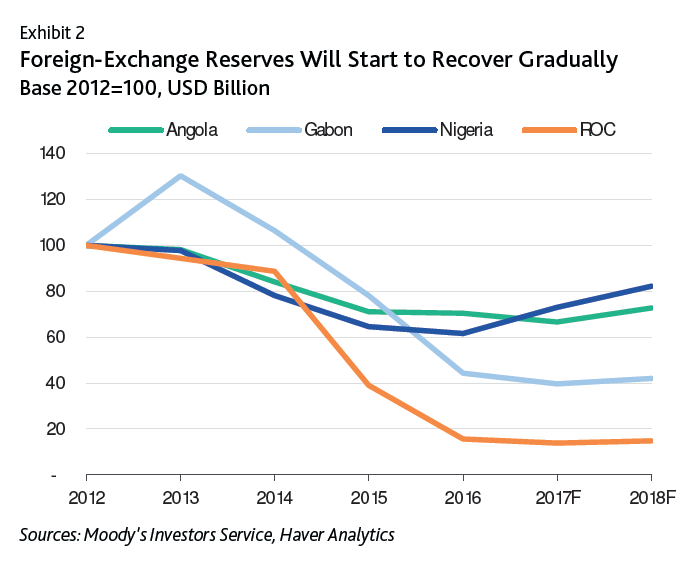 But this has been to the detriment of the non-oil economy, price stability and government balance sheets. Angola has been hit the hardest. In 2017, the rebound in oil prices and production will help stabilise reserves and allow authorities to provide more foreign currency to the economy. In Gabon (B1 negative) and the Republic of the Congo (ROC, B3 negative), where access to foreign-currency borrowing is limited and foreign exchange reserves have fallen furthest, we expect reserves to continue falling through 2017 but at a much slower rate. Pressures on banks are receding but recovery will take time. Banks in Angola, Nigeria and the Democratic Republic of Congo, whose economies are highly dependent on US dollars, are most vulnerable to foreign-currency shortages. Banks’ foreign-currency deposits remain thin and they have limited capacity to source new foreign funding. The shortages – and resultant currency devaluations – have also eroded banks’ loan quality, profitability and capital. In Nigeria and Angola, we expect some easing of pressures over the coming quarters as their central banks are now injecting more dollars into the economy. Foreign-currency shortages are constraining corporate profitability. Non-financial corporates operating in oil-exporting countries like Nigeria and Angola have been most affected by dollar scarcity and local currency weakness. They will continue to face operational challenges during 2017 but these will alleviate in 2018. Managing foreign-currency liquidity will remain a key policy challenge for Sub-Saharan oil exporters 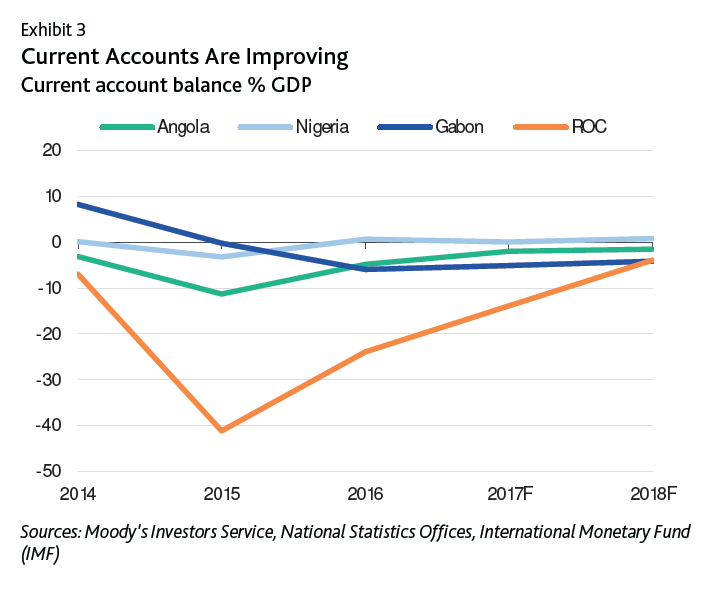 Angola, Gabon and ROC are strongly reliant on oil for driving economic activity, exports and government finances and have been most affected by the sharp decline in foreign-currency income due to the decline in oil prices. Nigeria has also been under pressure, but less so thanks to its more diversified economy, large domestic market and smaller government debt in foreign currency. Other commodity exporters in Sub-Saharan Africa such as Cameroon (B2 stable), the Democratic Republic of Congo (DRC, B3 stable), Ghana (B3 stable) or Zambia (B3 negative) have experienced varying degrees of liquidity challenges associated with lower commodity prices. But this cohort is less vulnerable because their economies, exports and government finances are less reliant on a single commodity. Other commodity-exporting countries such as South Africa (Baa2 under review for downgrade), Namibia (Baa3 negative) and Botswana (A2 stable) have not experienced foreign-currency liquidity constraints. We therefore focus on the four oil exporters in this section. Angola and Nigeria – foreign-exchange reserves will gradually recover but not return to the pre-crisis levels For Angola and Nigeria, a rebound in the oil price and in oil production is increasing foreign-currency receipts. Together with continued foreign-currency borrowing by the governments, and further local-currency devaluation relative to the US dollar, this will lead to a stabilisation of foreign-exchange reserves in Angola in 2017. In Nigeria, foreign-exchange reserves will reverse their trend and even start to improve (see Exhibit 2). ANGOLA AND NIGERIA WILL PROGRESSIVELY REVERSE THEIR FOREIGN-CURRENCY RATIONING In order to stem the decline in foreign-exchange reserves, the Angolan and Nigerian governments restricted imports or imposed capital controls to constrain foreign-currency outflows from the country. Foreign-currency rationing by the central banks prioritised sectors deemed important such as necessity goods or the oil sector, but to the detriment of the non-oil economy. In Nigeria, non-oil growth slowed to 0.2% in 2016 from 6.2% in the preceding five years, while in Angola, the non-oil sector contracted by 0.4% in 2016 (IMF data). Foreign-currency rationing has also deterred foreign direct investment. This is because investors fear incapacity or difficulty in importing the goods and services they need for their own operations, or restrictions on repatriating profits. Notwithstanding strong impediments to the ease of doing business, Nigeria remains more attractive because of its large domestic market.

In the first quarter of 2017, the National Bank of Angola has supplied more foreign currency to the economy relative to 2016 (Exhibit 4). In Nigeria, too, the central bank has started to increase the availability of foreign currency. We expect this trend to continue through 2017 in both countries, thereby progressively reducing the backlog of foreign-currency demand from banks and corporates. Demand is unlikely to be fully satisfied over 2017, however, and a divergence between the official dollar exchange rate and the parallel (black) market will likely persist. In Angola, the official rate has been AOA165/US$ versus AOA380/US$ on the black market lately, while in Nigeria the spread between the official and black market rate has improved most recently to 21%. FURTHER DEVALUATIONS WILL HELP IMPROVE CURRENT ACCOUNTS, BUT AT A COST Both Angola and Nigeria have devalued their currencies over the last few years (see Exhibit 6). Devaluation has made imports more expensive in local currency, limiting demand for imported goods and services. This encourages local companies to produce substitutes, while improved price competitiveness boosts non-oil exports. Currency devaluation, however, is generally inflationary and makes foreign-currency debt servicing more costly in local currency, putting an extra burden on government finances. 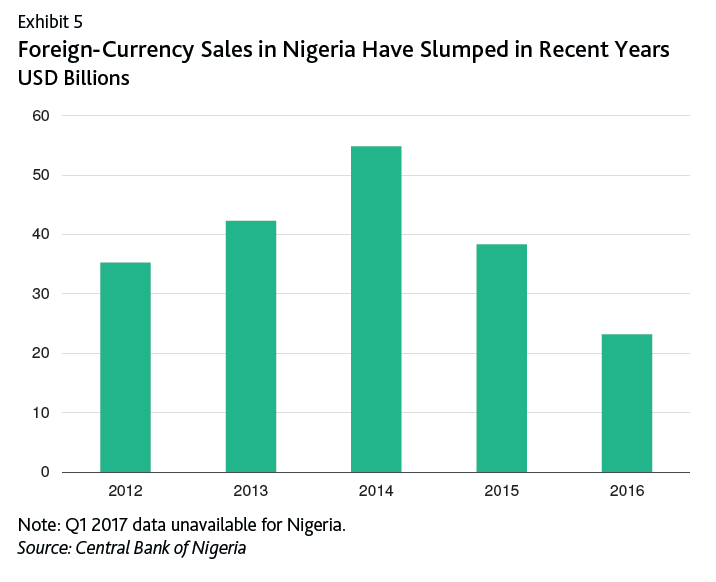 Angola is more vulnerable than Nigeria in this respect, with 41% of GDP in government debt (USD42 billion) either indexed to, or denominated in, US dollars. In contrast, Nigeria’s foreign-currency debt represents just 2.5% of GDP (USD10 billion). Comparatively, Nigeria also derives greater benefit from a weakening currency because its more diversified economy better enables it to substitute imported goods with local ones and to boost non-oil exports. 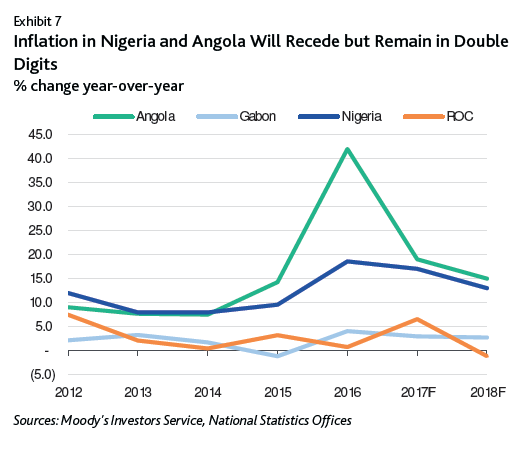 Inflation in both countries is already in double-digits (see Exhibit 7), reaching 36% year-on year in Angola and 17% in Nigeria as of April 2017. High inflation risks increasing social pressures and demands on public spending, presenting considerable challenges to fiscal policymakers. Foreign-currency borrowing is still an option In Angola, and to a lesser extent in Nigeria, the authorities have increased their foreign-currency borrowing since 2016, through international debt issuance and/or loans from the official sector (such as the World Bank). This has helped to stem the fall in foreign exchange reserves but at the cost of increased government exposure to foreign-exchange risk.