Since the late 1970s when the digital age started off, a lot of electronic devices have been created all over the world. To date these technological innovations continue to make the world better, from the use of computers and mobile phones as way of communication to the use of drones as a way of delivering medical supplies to remote areas. Indeed advancement in technology has allowed the global economy to reach greater heights than ever imagined.

However, despite the rapid changes in technology that allows us to make our lives better, the changes have also seen millions of tons of electronic devices become obsolete thus leading to one of top environmental challenges facing the world; electronic waste. Unlike before, the lifespan of electronic products has drastically reduced. During the start of mobile phones, one could be able to hold on to one phone for a long time, however, due to technology advancement, new phones are being introduced to the market faster thus reducing the time one holds on to a particular phone.

This, in addition to the constant demand for the latest electronic devices by consumers, has seen electronic waste become the fastest growing global waste stream in recent years as people end up disposing off their outdated devices in numbers. In fact according to the 2017 Global E-Waste Monitor report, in 2016 a staggering 44.7 million metric tonnes of e-waste was generated globally and the number is expected to increase to 52.2 million metric tonnes by 2021.

Despite the dangers that this waste has on the environment, only a shocking 20% or approximately 8.9 million metric tonnes is usually collected and recycled. The remainder of the electronic waste ends up in dumping sites or it is incinerated. Most of this electronic waste ends up being dumped in developing continents such as Africa rather than in developed countries where it was produced. This is considered, by the first world, the cheapest way to deal with the e-waste as compared to recycling.

Even though it is illegal, most developed countries have found ways of dumping their electronic waste to developing nations without raising the red flag. For instance, most of the countries usually export these goods to developing nations with the pretence that they can be reused or refurbished because it is legal. While in fact according to the International Criminal Police Organization (Interpol), much of the products are falsely classified as ‘used goods’ although in reality they are non-functional.

As a result of such dumping, Africa, through Agbogbloshie (dampsite) in Accra, Ghana, has become home to one of the largest dumping grounds for electronic waste in the world. This electronic graveyard is referred to as one of the most toxic places on the globe. The environment in the area has been highly polluted by different materials and toxic substances like lead, arsenic, cadmium, mercury, and flame retardants that come from the digital waste.

Apart from the environment, the people who depend on the major dumping site as a source of work are also in danger as they come into contact with the harmful substances while handling the e-waste without any protective gear. As a result, this threatens their well being, with many young people meeting their doom due to cases such as cancer and respiratory problems.

The case is similar in many developing nations and that’s why tackling the issue needs to be addressed so as to save the people affected and the environment. For starters, governments of developing countries need to understand that e-waste is a crucial challenge that requires a better management system. As a result of lack of financial resources, environmental laws and awareness, e-waste management has been a major challenge for many developing nations, resulting in the use of open dumping and landfills, which is hazardous. 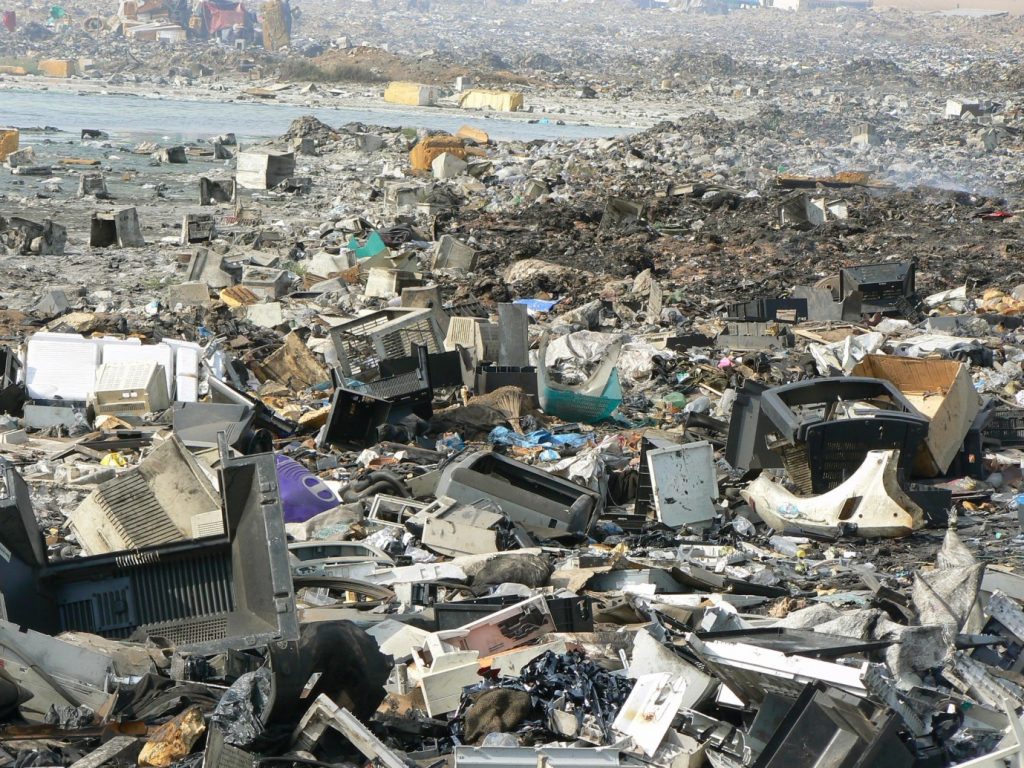 There is, therefore, a need to shift from this method of disposal to more sustainable e-waste management strategies. The Ghanaian government, for instance, has taken a step forward by constructing an integrated e-waste recycling facility, at Agbogbloshie. The recycling plant will ensure that the harmful substances that come with the e-waste is captured and processed ensuring safety for the people and the environment.

In doing so, waste can be recycled to something useful. It means taking up a circular economy model. For instance, most electronics include metals that are valuable; if they were to be salvaged through the right channels, they can be re-used to bring revenue and develop the country. On the other hand, with such metals being salvaged from the waste, it can reduce the unsustainable mining of such metals in different regions.

In addition to constructing the plant, the project will also include the establishment of a network of collection centres that will help supply materials to the plant. The whole project is expected to create more than 200,000 job opportunities for the country’s youth. The government is also promoting public educa