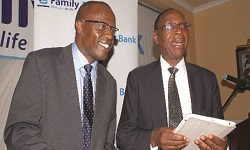 Security units rounded hundreds of people in an operation to flush out terrorists. According to Police, those targeted were immigrants residing in Nairobi, Mombasa and Nakuru towns.

Naturally, the crackdown has attracted widespread condemnation from politicians and human rights advocates, conserved that it has indiscriminately targeted the Somali community. Majority Leader in the National Assembly Aden Duale has found himself in the crosshairs of ruling Coalition, Jublee, following his remarks that appeared slanderous to the operation.

Yet it is difficult to fault those opposed to the crackdown. Indeed, security agents appear to target people of Somali origin – perhaps owing to the thinking that the Al Shabaab are ethnic Somalis. But, based on media reports, those suspected of terror attacks are in fact Kenyans – some come from as far as Busia!

The war against terrorism cannot be won via ethnic and/or religious profiling.