Uganda’s announcement that it will ship early crude oil exports through the Port of Mombasa later this year was clearly a major diplomatic win for Nairobi.

But beyond the signs of renewed diplomatic camaraderie between the two neighbours that accompanied the announcement is the harsh reality of the quick sand on which the ambitious joint East Africa infrastructure projects are built. Uganda has been flip-flopping on this decision for nearly a decade, changing her mind severally on which route makes business sense for her to bring in the petrodollars.

Kampala had earlier indicated it would tap the Tanzania route, potentially sidelining Kenya and denting Nairobi’s credentials as the driver of the joint infrastructure projects pursued by Kenya, Uganda, Rwanda and South Sudan. Such, has been a pet agenda for Kenya’s President Uhuru Kenyatta. He was in Uganda in February to meet his East Africa counterparts in what is largely seen as a never-say-die approach to revive the proposed projects.

Kenya last year completed the first phase of the Standard Gauge Railway from Nairobi to Mombasa, marking a milestone for a crucial project that sits at the center of East Africa’s future infrastructure ambitions.

But behind the fanfare as Kenya ushered in the mega railway system and kicked off the next phase of the line that runs from Nairobi to Naivasha, focus shifted to the neighbouring Uganda and Rwanda who are supposed to extend the line in their respective countries. This would effectively complete what could be East Africa’s first joint project that cuts across three countries.

Uganda’s choice to export its crude oil through Kenya, effectively abandoning Tanzania has brought to scrutiny the status of the Northern Corridor Infrastructure Projects (NICP), a loose alliance made up of Kenya, Uganda, Rwanda and South Sudan dubbed the Coalition of the Willing (CoW) which was birthed in 2013 to fast-track joint regional projects.

It has emerged that the four countries are struggling to live to the dream with the joint infrastructure plan facing roadblocks on the back of harsh realities of East Africa’s politics, resistance and clashing national interests.

When the leaders from the four countries met in Uganda late February this year, they committed to pursue the joint projects. But, it would appear that is the furthest that story goes.

Back to the scorecard on what are some of the proposed joint projects, Kenya has for example indicated that it would terminate the SGR in Kisumu, at least for now, throwing Uganda into a spin as the line was initially scheduled to run from Mombasa to the Malaba border post, from where Uganda would pick it up. This would in effect render the Uganda SGR project unviable. It is such a development that saw Rwanda last year announce that it would link its line to Tanzania’s planned SGR.

The score-card on the joint infrastructure plan, analysts said, is a tipping point for Kenya’s President Uhuru Kenyatta and his counterpart Paul Kagame who have just kicked off new presidential terms.

When President Kenyatta read his inaugural speech on April 9, 2013, a promise to retool Kenya’s foreign policy was conspicuous. To him, Kenya’s future was tied to deepening its bonds with neighbours across East Africa and Africa as a whole.

Having run his campaign on an anti-west platform on the back of the charges he was then facing at the International Criminal Court (ICC), President Kenyatta was in a way promising a focus on Pan-Africanism.

Over the next two years, President Kenyatta would embark on a regional charm offensive hinged on a foreign policy focus on Africa whose first clear outcome would be the birth of the Coalition of the Willing (CoW). With his counterparts Salva Kirr (South Sudan), Yoweri Museveni (Uganda) and Paul Kagame (Rwanda), the countries pledged to jointly invest in building roads, rail, airports and pipelines in a declaration that would dramatically redraw the region’s knackered infrastructure system.

In the next few months, the CoW— whose proponents saw as a faster alternative towards fully integrating the East African Community (EAC)— would register quick successes including increased efficiency at the Port of Mombasa and a massive reduction of police roadblocks, multiple weighing at weighbridges and uncoordinated border point checks along the Mombasa-Malaba Highway. These bottlenecks had been blamed for the unacceptable long lead-time between goods arriving at Mombasa and arriving at destinations across east Africa.

But the pomp and colour that marked the formation of the coalition, which initially hosted bi-monthly meetings for the respective Heads of State seems would later fizzle out. The Heads of State last met last month in Uganda, their 14th such gathering. As such, some of the major joint projects have been abandoned while a sizeable have taken a different trajectory from what the CoW had designed. 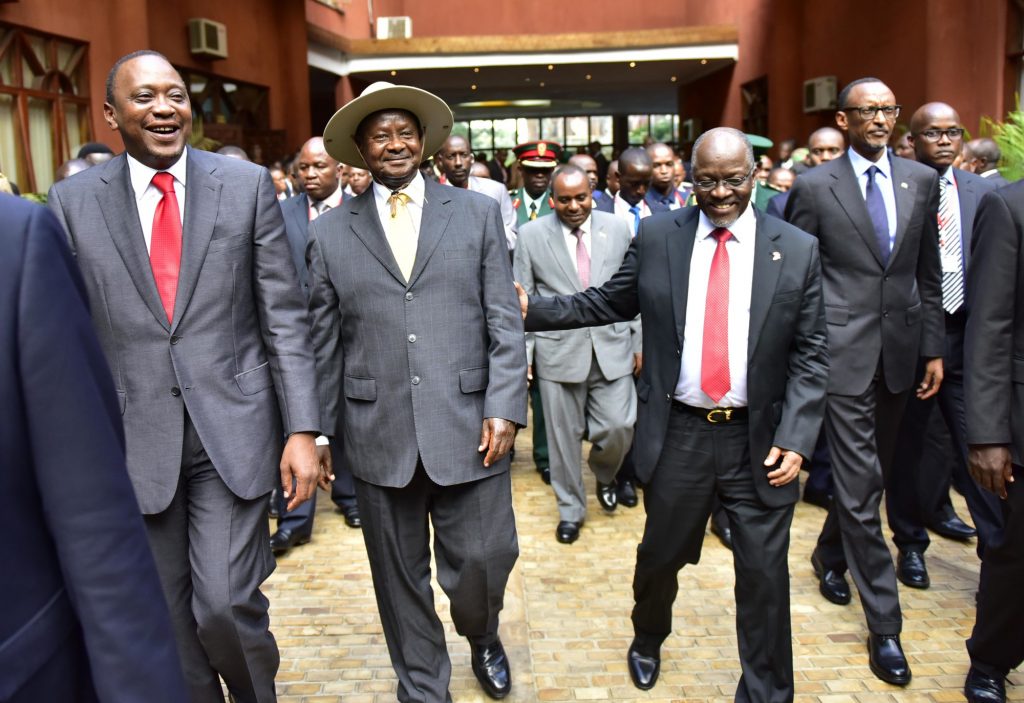 So what went wrong?

People familiar with the Northern Corridor Infrastructure Projects, who spoke to NBM said a series of developments have conspired to ground the ambitions which would have greatly boosted the region’s competitiveness in Africa by enhancing connectivity and facilitating trade among the member countries. It was not hard to see this coming.

Sources said the CoW has suffered under the heavy weight of conflicting geopolitical interests and disagreements over the instability in Somalia, Burundi and South Sudan, sending the region back to the drawing board in its dream of rolling out joint mega projects.

The initial plan was for Kenya, Uganda and Rwanda to fast-track integration projects, with Tanzania and Burundi seen as lagging behind in their support.

“The exclusion of Tanzania and Burundi in the coalition caused disquiet within EAC as the two countries, despite their obvious slower pace in the integration agenda cried foul over being sidelined. This was a dicey dilemma for the CoW partners, as they wanted the coalition to succeed while at the same time maintaining the EAC spirit of integrating the 5 countries. This was going to be a test of times,” said Professor Peter Kagwanja, an international relations expert.

At some point, Burundi and Tanzania were brought on board into the Coalition. But that did not effectively take off as the two countries would occasionally send junior representatives to the Heads of State meetings and were not quick to endorse the joint projects.

But Kenya, Uganda, Rwanda and South Sudan pursued the projects, making major strides especially on the SGR. Kenya section of the Standard Gauge Railway is one of the areas where huge progress has been made. By April last year, Uganda had signed a commercial contract with China Harbour Engineering Company for the Malaba-Kampala section.

In addition, analysts say that the decision by Rwanda to opt to construct a railway linking it up through the Tanzania as opposed to Kenya as initially conceived under CoW was partly contributed to weakening of CoW.

Under the initial agreement, Kenya was to construct a railway line linking its port of Mombasa to Rwanda through Uganda. But while Kenya has progressed its side of the railway with the Mombasa-Nairobi section, the exit of Rwanda for the Tanzania route and the seemingly non-committal nature of Uganda has complicated things. Under the Cow, the Kenya, Uganda and Rwanda had tasked their finance ministers with jointly negotiating with China for funding for the regional railway line.

Without a link to the wider East Africa, Kenya’s SGR project is largely seen as economically unviable, with reports indicating that the Kenyan government had set aside Sh15 billion to subsidize the operations of the rail once they officially begin on June 1, 2017. China Exim Bank is already financing 85% of the first phase running from Mombasa to Nairobi at a cost of $3.8 billion (Sh387 billion), excluding interest. The second section, estimated to be 120 km, will run from Nairobi to Naivasha and will cost $1.5 billion (Sh152.5bn). The 370km third section, which will include a branch to Kisumu next to Lake Victoria, will cost $4.9 billion (Sh499.1 billion) to build and supply with locomotives and rolling stock, Kenya Railways said.

Announcing the preference for the Tanzania route in May 2016, Rwanda’s Minister for Finance Claver Gatete was quoted saying that it is cheaper and shorter than the route passing through Kenya. “We opted for the route transiting to Tanzania during the construction of our railway line because the Kenyan route would be expensive and time-consuming,” said Gatete

It is also understood that the involvement of Kenya, Uganda and Burundi in the stabilization of Somalia has also complicated the Coalition’s cohesiveness.

“The experiences in Somalia have furthered tensions in the region, especially with Kenya on one side and Uganda and Burundi on the other. The latter initially saw Kenya’s military as ‘ceremonial’ but with time, the country’s influence in the Amisom incursion has grown a great deal to the chagrin of Uganda, Rwanda and Burundi. Kenya’s growing influence at the Somalia mission has not gone down well with the rest of its neighbours who see Nairobi as a newcomer in military intrusions. ”

The entry of President John Magufuli in Tanzania seems to have unbalanced the fledging coalition. For starters, the initial personal interests that brought the founding heads of State into CoW seem to have weakened.

In the early period when the COW was mounted, relations between Dar and Kigali were frosty following a decision by Rwanda to deport Rwandan immigrants from Western Tanzania and a remark by President Jakaya Kikwete that Rwanda should negotiate with Hutu rebel group FDLR.

Analysts say that with diplomatic relations between Kigali and Dar at a low, Rwanda’s decisions to join the CoW was seen as hitting back at Tanzania. But following the retirement of President Kikwete, the relations between the two countries seem to have recovered as underlined by President Magufuli’s decisions to make his maiden visit to Rwanda soon after assuming office.

At the same time, analysts say the strong lobbying by President Magufuli for the re-routing of the Uganda crude pipeline from the assumed ‘natural route’ through Kenya irked Nairobi, resulting in a deterioration of the otherwise strong diplomatic relations between Nairobi and Kampala.

At the time, Uganda and Kenya had agreed to construct a joint pipeline running through Hoima in Uganda to Lamu in the Kenya coast. But President Magufuli is said to have personally lobbied his counterpart in Uganda resulting in the re-routing of this pipeline.

The change in routing was largely blamed for among other things insecurity along the Kenyan coast, high tarrifs on the route, complexity of the terrain on the Kenyan side and the expensive land acquisition costs in Kenya. At the same time, there was thinking in kampala that proposed site for the oil terminal at Lamu lacked the natural hedge that it was said to have.

President Museveni repeated this views during the signing ceremony for the Tanzania-crude oil pipeline saying that Tanzania has constantly been a peaceful and stable country and that this factor was favourable for the construction and that land system in Tanzania is easier and that Tanga is a protected port, “it makes it justifiable for the oil project as the waves of the ocean do not disturb the transportation.”

People familiar with background happening say that the exit of Uganda from the Kenyan route was even more painful for Kenya as it changed the economics of the Kenyan crude pipeline. The Uganda crude oil pipeline is expected to cost $4 billion, while the Kenyan one is expected to cost $2.1 billion. Kenya’s recoverable oil deposits are estimated at 750 million barrels, while Uganda’s are estimated at 1.6 billion barrels

Kenya appeared to have moved on reaching out to joint venture partners- Maersk oil, Tullow oil and Africa Oil— to develop the commercial and technical aspects of the proposed Lokichar-Lamu pipeline, with the parties said to have commenced crucial studies including the front end engineering design (FEED) and the ESIA for the pipeline with a view to having both the Turkana development and the pipeline operational by 2021.