Cover Story
BY JANE WACHIRA The cooperative movement in Kenya is a four-tier structure; including primary, secondary societies, National Cooperative Organizations (NACOs) and apex societies. Primary societies have been defined as those whose membership is restricted to individual persons. It is created by individuals at the lowest level of structures of cooperatives who have a common economic interest and a desire for promoting those interests by pooling their resources together and working as a team in order to minimize the cost of doing the same thing as individuals. Individuals may also form Savings & Credit Societies, which enable them to pool their money from which they can borrow in time of need. Individuals in Saccos are able to borrow money from their societies at more reasonable terms than they would obtain from commercial banks. Examples include Harambee Cooperative Savings and Credit Society Ltd formed by employees of the Ministry of Health. A secondary society is a cooperative society whose membership is comprised of primary societies. NACOs offer specialized services to their affiliates. Currently there are 9 NACOs including, Cooperative Bank of Kenya, Kenya Cooperative Creameries (KCC), Kenya Farmers Association Ltd (KFA) and Cooperative Insurance Company Ltd (CIC) among others. Apex societies refer to a cooperative society the membership of which is restricted to cooperative unions e.g. the Kenya National Federation of Cooperatives. It is the mouthpiece for Kenyan Cooperative to preserve and propagate both in the country and abroad, the cooperative principles and values on which the movement was founded. Cooperative society’s specifically primary societies are engaged in a wide range of activities including Agricultural, Savings and Credit cooperatives (SACCOs), and housing and consumer cooperatives. This article focuses on Savings and Credit Cooperatives. A savings and credit society affords members an opportunity for saving regularly, accumulating savings and thereby creating a pool from which they can borrow exclusively for production purposes at fair and reasonable rates than would be obtained in other financial institutions. Most are established among the salaried workers in the formal sector including government ministries, parastatals and other organizations where members’ contributions are deducted from salaries and remitted to the society. The same treatment is accorded to loan recoveries. Their popularity arises from their ability to lend money at low interest rates and without demanding for substantial security. Members’ shares, coupled by guarantee by society members are considered adequate security for a loan. A borrower also receives a loan 3 to 4 times his shares and have 36 to 48 months to repay. Saccos in Kenya are regulated by the Sacco Societies Act 2008, which has further established the Sacco Societies Regulatory Authority (SASRA) with the mandate to license, regulate and supervise and to levy contribution among others. Sacco societies are to maintain minimum capital requirements as prescribed by SASRA or else are liable to pay a penalty interest not more than 1% of the amount of deficiency for every day with deficiency. Capital in a Sacco society is composed of core capital defined as members shares, retained earnings, disclosed reserves, grants and donations all of which are not meant to be expended unless on liquidation. Institutional capital refers to the core capital less the members’ share capital. Minimum capital ratios include core capital of not less than 10% of the total assets, a core capital of not less than 8% of its total deposit liabilities and institutional capital of not less than 8% of its total assets. The minimum core capital is Sh10 million. Saccos carrying out deposit taking business at their commencement shall at the point of applying for license be required to have a core capital of not less than 4% of total assets which shall graduate to 10% by the fourth year, a core capital of not less than 5% of its total deposit liabilities, which shall gradually graduate to 8% by the fourth year and an institutional capital of not less than 2 of its total assets which shall graduate to 8% by the fourth year. It is the mandate of the board of directors of each SACCO society for establishing and maintaining capital. 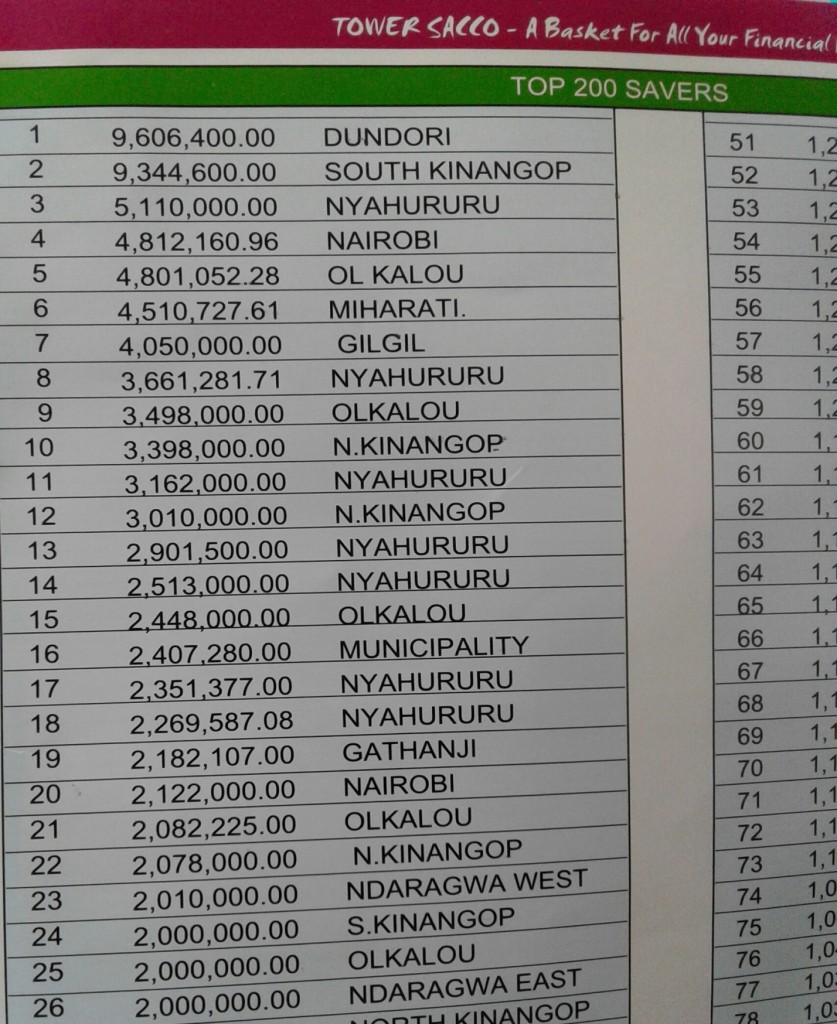 The supreme authority of a Sacco is vested in membership responsibility exercised in general meeting. The role of the board of directors is to ensure management maintaining proper and accurate records that reflect the true and fair position of the Sacco’s financial condition, ensure the Sacco functions effectively and that an adequate and effective internal control system is put in place, policy making, human resource policy, savings policy, liquidity policy dividend and risk management policy. Ensure the Sacco makes adequate provision for known and probable losses likely to occur as required by regulations; ensure that the Sacco society maintains a positive image. They are also responsible to members for their production of annual audited accounts to be presented at the AGM. Directors of Saccos are not to receive remuneration in form of a salary for services rendered to the Sacco but may be reimbursed for necessary expenses incurred in the course of discharging lawful duties to the benefit of the Sacco. The CEO is responsible to the board of directors for the day to day running of the Sacco, paying attention to implementation and adherence to prescribed policies, procedures and standards. A front view of Tower Sacco cooperative society Tower Sacco, formerly Nyandarua Teachers Sacco, was registered on September 15, 1976. It is located in Ol kalau, Nyandarua County. The purpose then was to serve primary school teachers with initial membership of 10. Their objective was to accord teachers an opportunity to save regularly, borrow wisely and repay loans promptly. The Sacco’s business started in 1977 with the highest loan of Sh15 000. In 1996 the economy went down and banks closed their branches in small towns, they also raised their minimum balance to between Sh500 – Sh2000. The nearest banks to Ol kalau were to be found in Nakuru, 45km away, Nyahururu 35km away or Gilgil 30km away. Saccos hence started Front Office Services Activities (FOSA) to bridge the gap. In 2010 Nyandarua Teachers Sacco rebranded to Tower Sacco with an aim to have a National Identity. It also decided to have a common bond and made membership open to members of the Public. Membership, that now spreads across the entire County and beyond includes government ministries, TSC, KDF, Kenya Police Forces, Kenya prisons service, county government, public and private institutions of learning hospital, parastatals, farmers and the business community has since risen to 36,000 from 7000. It has over 70 employees in its 6 branches and 8 satellite offices. The Sacco in partnership with government agencies carries out salary processing especially for teachers salaries. It also sends updates such as salary processing, loan processing, and farm produce processing, guarantor-ship notification ATM withdrawal alerts and general communication to members. It offers loans up to three times members’ benefits, including salary advance, Okoa advance, which is granted to persons awaiting a loan from the society, maturity of a cheque or pension lump sums. A normal loan is granted 3 times member’s deposits with a maximum repayment period of 60 months. Emergency loans are processed within a day, and has maximum repayment period of 12 months. Dividend advance, loan and asset finance and farm produce advance services are also offered. Interest rate on normal loans is 1% per month on reducing balance, with a commission of 0.8% of the amount granted. Emergency loans are charged an interest of 1% flat rate, including a risk fund of 2% and 5% commission on the net amount charged. One can borrow up to four loans of different kinds. Dividend rates has seen a steady rise now at at 12% from previous 6% and 10%. Shares are open ended with a minimal value of Sh100 each. Currently the Sacco has deposits worth Sh3.2 billion and has issued loans amounting to Sh3.4 billion. Its assets stand at 4.3 billion. In 2014, during the International Cooperative day, it scooped awards in Nyandarua County for beig; Best managed urban Sacco; Sacco with the highest institutional capital; Most innovative cooperative society; Best FOSA and overall best cooperative society. At a national level, it was recognized as the 2nd best SACCO for the highest dividend/payment to its shareholders. A section of top 200 savers in Tower Sacco Its CEO, Mr Gabriel Waweru says Saccos are the alternative to commercial banking. Unlike commercial banks whose main aim is to make profits, Sacco’s are not out to make abnormal profits, he says, Saccos main aim is to help the common Mwanachi with minimal capital to access loans at low interest rates. Interest rates of Banks fluctuate according to the status of the economy while Sacco interest rates are constant to completion of the loan repayment period. Saccos exercise loyalty to their members and are committed to offering service. While Sacco members are also involved in decision making of the society, banks are business entities whose decisions are made by the majority shareholders. The highest saver at Tower Sacco was a primary school teacher who resigned to start his own business. Starting from humble by running a kindergarten, to a primary school, to a girl’s and a boy’s secondary schools and has plans underway to establish a tertiary institution. Currently the Sacco has given him a loan worth Sh45 million. Sacco’s are not all roses and Voss water; they too have their share of challenges. From mismanagement of indoor operations to non-respect of the separability of board of director’s duties and those of executive directors, where the management is driven by greed and materialism leading to huge debts.