After the unfortunate terror attack at the Dusit office complex along Riverside Drive in January, Kenyans, in their typical fashion, weighed in on how best to deal with the ever-present threats of terror. Consensus seemed to emerge that we need to arm private security guards, who man most of the office buildings in the country and who, indeed, are the first line of defense whenever there is a security breach.

Predictably, a debate on the merits and demerits of the move arm private guards with firearms raged, with a majority opposed to the proposal to arm the guards arguing they are ill equipped in both training and experience and that would rather arm the National Youth Service to fill in the gap.

To put this to context, DAVID ONJILI spoke to Mr Isaac Andabwa, the founder and CEO of Kenya National Private Security Workers Union (KNPSWU) at his Hurligham office. The union was founded in 2007 and has so far employed close to 300 Kenyans and boasts of a membership of about 200, 000 private security guards.

The KNPSWU is a strong affiliate of COTU (K) and is also recognized by both Switzerland based UNI Global Union that represents close to 20 million employees worldwide in various sectors.  The Union has been recognized as the best in Africa in representing and advocating for the interests of Private Security Officers.

A number of the top private security firms in the country like G4S, KK Security, Wells Fargo Limited, Bob Morgan, Security Group Africa (SGA), Frontier, just to mention a few, have their employees as members of the union. To join the union, private security officers can join individually as members or collectively under the employer’s umbrella. The membership is voluntary, as espoused in Article 41 of the Constitution of Kenya, supported by other supplementary laws. 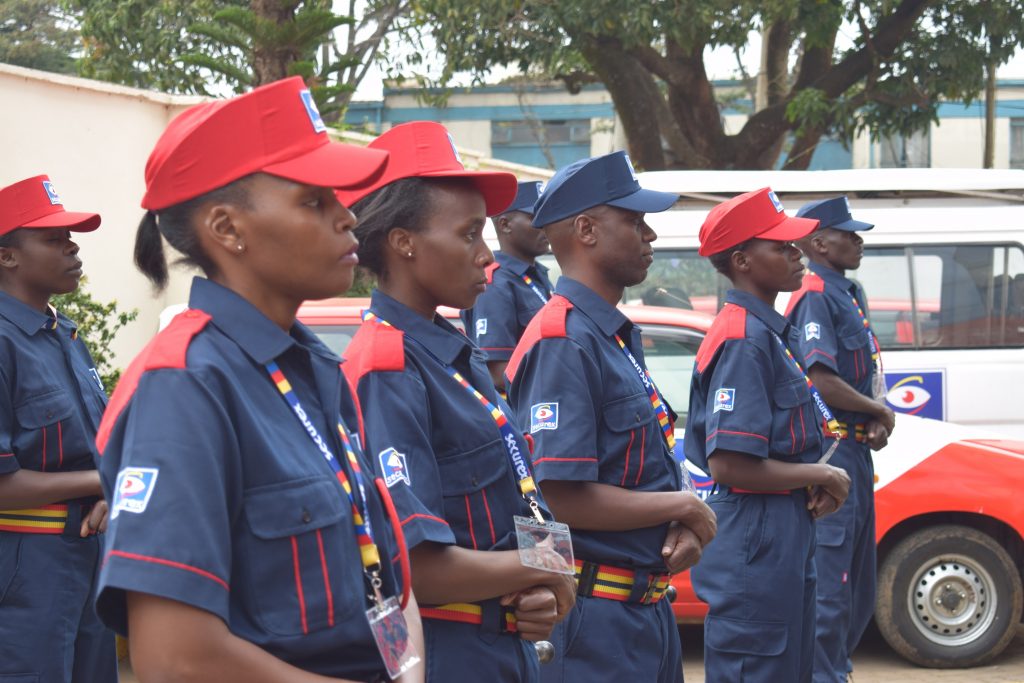 Union members are deducted through a check off system or direct payments for individual membership. The Union boasts of a robust representation of about 400 representatives nationwide who organize, recruit and sensitize the private guards on the benefits of being unionized, including better wages negotiations. To this end, Mr Andabwa and the organization have faired well, imploring employers to be sensitive to the prevailing economic circumstances in the country, especially on the minimum Wages Order.

The Union has also been conducting capacity building trainings where members are educated on key and relevant 21st century disciplines like Information Technology and financial literacy. This is to ensure that being a guard in society is seen as a dignified profession able to attract the smartest of society.

On the raging debate on whether to or not arm privates guards, KNPSWU views the raging debate as shallow especially in the context that the media and those speaking about it have narrowed it down only to guns.

With guards being the first line of defense in most office and home buildings, Mr Andabwa offers, their training must be structured and that a curriculum is already being developed to fully equip all private security officers with the necessary knowledge to make them efficient.

The private security sector, he says, has been operating without a governing law since independence. After lobbying and agitation, which was fronted by KNPSWU and other stakeholders, President Uhuru Kenyatta accented into law in 2016 the Bill that established the Private Security Regulations Authority. As a union, KNPSWU believes that the Authority will bring full sanity in the sector and will tame rogue employers.

Specific training to address specific needs is required. You can arm guards with guns but if they have poor scanning equipment and skills then unlicensed gun owners will access the building due to inability to identify the weapon.

Solutions to the challenges facing guards at work will not only lie in arming guards, Mr Andabwa says, insisting it should start with the basics like mandatory relevant and up to date scanners for the guards, communication gadgets and skills to use them and martial arts.

While individual private security firms conduct individual training to their staff, KNPSWU believes a structured curriculum detailing the specific objectives and expected outcome of training private security officers is needed. This wholesome approach, he says, is what is required in the industry, noting that guards escort money, man sensitive places like banks, churches and institutions of learning, which have experienced serious terror attacks in recent times. As such, specific training to address specific needs is required. You can arm guards with guns but if they have poor scanning equipment and skills then unlicensed gun owners will access the building due to inability to identify the weapon.

The National Industrial Training Authority (NITA), Private Security Regulatory Authority are the relevant government bodies that should be in charge of curriculum development and implementation.

Far-reaching reforms are on the horizon for the employers and employees in private security industry as the country seeks to ensure the safety of its citizens. Cabinet Secretary for Interior Dr Fred Matiang’i sometime last year for instance, called on the private security stakeholders to prepare themselves for more responsibility, as the police will no longer be involved with the cash in transit business, or any other private engagements and that a unified database of the private security officers will be rolled out so that in the event they are armed, they can easily be monitored.

The Union is therefore rightly involved and is trying to ensure the interests of all the membership is taken care of.