Adolescents are defined as individuals between 10 and 19year age group. Young people include up to the age of 25 years. This phase is characterised by acceleration of physical growth and, psychological and behavioral changes, thus bringing about transformation from childhood to adulthood. Physical growth and development are accompanied by sexual maturity, often leading to intimate relationships.

Adolescent HIV/AIDS is an epidemic on its own and needs to be handled and managed separately from childhood and adult HIV. Adolescents account for about 6% of all people living with HIV and about 15% of new adult HIV infections. Adolescent girls and young women are disproportionately affected by HIV. In countries with high HIV prevalence, they are two to three times more likely to be infected than boys of the same age group. In adolescents, HIV may result from maternal to child transmission, but increasing number of adolescents who were not born with HIV become sexually active and expose themselves to the risk of HIV infection by not or inconsistently using preventive methods.

Adolescents not only face problems in accepting their HIV status, the need for life-long treatment and other positive family members, but also have sad memories of their lost parents and a big question mark in the future regarding their health, education, career and marriage. An adolescent is an individual who gets infected with HIV once, but stays infected and affected for life.

There is growing recognition that adolescents are a key population in need of attention within the worldwide HIV/AIDS response. Globally, about 2.1 million adolescents between the ages of 10 and 19 years are living with HIV. In 2014, there were approximately 220,000 new HIV infections among adolescents. Despite major advances in HIV prevention, care and treatment, adolescents are the only age group in which deaths due to AIDS are not decreasing in Africa. The majority of these deaths occur in adolescents who were infected at birth and in infancy.

Access to and uptake of HIV testing and counseling by adolescents is significantly lower than by adults, and antiretroviral therapy (ART) coverage rates are lower for adolescents than for any other age group of persons living with HIV, signaling a need for targeted adolescent programs. In addition, there is lack of expertise and training of healthcare workers and caregivers in managing a child’s transition from paediatric to adult care, including the psychosocial and reproductive health needs and uninterrupted treatment during this transition. 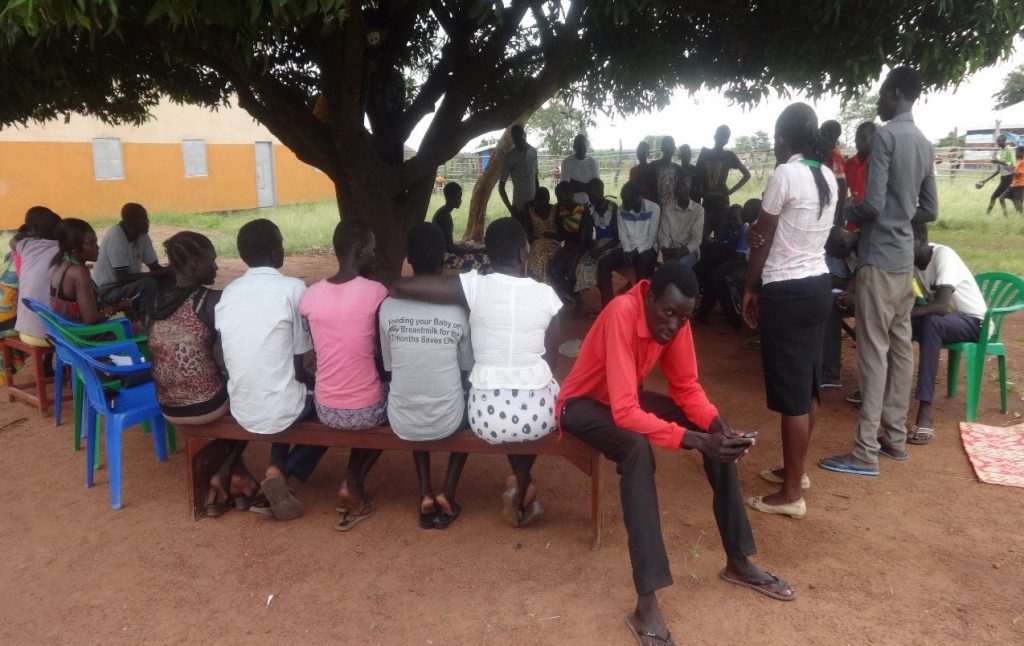 Globally, the realization that to turn the tide against AIDS will require more concentrated focus on adolescents and young people has resulted in efforts to foster meaningful involvement of adolescents in all aspects of programming and advocacy. In Kenya, initial HIV programs were organised around paediatric, or adult care with adolescents who are living with HIV being treated through paediatric care facilities. This gap had major implications for retention of this age group in HIV care, treatment, and support programs as well as for adherence to treatment, especially as they transition from paediatric to adult clinics.

Adolescents are a challenging population to reach in traditional care settings, as they tend to not seek services at health centers due to stigma and fear of discrimination. In addition, younger adolescents rely on their caregivers, who may also be affected by the fear of stigma and discrimination, to provide them with care and treatment. To circumvent this problem, there has been a deliberate effort both by the government and HIV programs to create and support adolescent-specific services, adolescent-friendly clinic days and adolescent corners at health facilities to increase access to services for this population. There has also been an increased effort to ensure that health providers are trained in providing adolescent-friendly health services.

At the community level, there have been efforts to develop community adolescent health awareness and testing campaigns led by adolescent peer ambassadors. These peer ambassadors are typically older (ages 13 to 19 years), who lead adolescent psychosocial support groups and have extensive knowledge about HIV and stigma. Implementation of targeted activities for adolescents and youth during community events, which provide behavioral interventions, including school-based education and sensitization activities has been strengthened. These events improve community knowledge and community support around HIV and AIDS.

The target beneficiary populations are adolescent boys and girls aged 10 to 19 years and young people, particularly women, aged 20 to 24 years.

This fast-track plan recommends evidence-informed combination approaches to achieve the set goals. It prioritizes and defines specific interventions that are expected to produce the highest return on investment if implemented on scale.

With investments and advocacy in the HIV response, age of sexual debut has increased from 14 to 16 years from 2008.

At the community level and in schools, there is increased education and counselling of adolescents to reduce high-risk behaviors such as initiation of sex before age 15, sex with multiple partners and sex without condoms. This has resulted in safer sexual practices with resultant decline in HIV especially in the most severely affected countries.

There is need for a national consensus on the indicators necessary to identify HIV-infected children and monitor treatment. Currently, the monitoring tools including clinical and laboratory are not easily available and where available, they are not efficient.

Offering psychosocial support in busy primary healthcare services, where HIV services compete with other illnesses is a big challenge. HIV has resulted in increased pressure in our outpatient services and most manifestations mimic the common childhood illnesses such as pneumonia, ear infections and skin diseases. A child can be seen repeatedly with such infections without being offered HIV testing.

Effective prevention of mother to child transmission (PMTCT) delivery is elusive due to persistent stigma, which poses a barrier to service access.  Where rapid testing is not available, women do not return for HIV test results, there is low, or reluctance in accepting ARVs offered to HIV-positive women at antenatal clinics if the mother turns out positive.

There is persistence in low and poor utilisation of ante-natal care (ANC) services and low rate of hospital delivery especially in disadvantaged communities. Home deliveries create difficulties in tracking and follow-up for HIV infected mothers.

The complexities of infant feeding for HIV-positive mothers in very low-resource settings is still a major challenge with low rates of exclusive breastfeeding up to referral for ART when needed by mothers and children including the availability of ART service sites in the area.

ARVs formulations appropriate for children may not be available, and when they are available, the regimens are complex and difficult to follow. Even where diagnostics and drugs are available, once a child is diagnosed, health providers may not be familiar with paediatric treatment and care protocols. This may result in poor adherence, inadequate drug levels, or primary drug resistance which all contributes to ARV treatment failure.

Children who are orphaned are less likely to access healthcare, are at a higher risk of child labour and sexual exploitation and contracting HIV/AIDS if they were not already infected at birth. They lack legal protection, lose inheritance rights and access to essential services available to other community members. Professional help from doctors, teachers and lawyers may be less forthcoming to a child who does not have a parent or foster care provider. These are some of the areas that require very clear guidelines as to how such children can be helped.

HIV disclosure involving children and adolescents is still not optimal with many children being “cheated” that they are taking drugs for other illnesses such as malaria. Parents are still reluctant to disclose to their children and late disclosure may lead to poor adherence to medication by adolescents or feel rejected.

Malnutrition, food insecurity and other infections such as malaria and pneumonia make treatment of HIV more complex. HIV infected children have to battle with poor nutrition (both macro and micro-nutrient deficiencies) and their care must be comprehensive apart from provision of ARVs. To address these multi-factorial issues, there is an urgent need for a concerted, sustainable and multi-pronged national and global response.

The rate of condom use and protection remains low among youth and adolescents.  Studies have shown that more girls than boys use condoms at their first sexual encounter. As sexual relationships build, more women aged 15 to 24 years are reported to abandon use of condoms with partners of unknown status. This explains how currently adolescents and youth account for 70% of Kenyan pregnancies.