Property
BY VICTOR ADAR Leafy suburbs like Karen, Runda, Muthaiga where individuals selling land were scarce to find to as recent as 10 ago are now opening up for developers thanks to owners who are intent on getting value as economic times get tough. In fact, Muthaiga and Gigiri, according to HassConsult’s land price index quarter two report 2071 released last month, are other old and well-established suburbs that are currently thriving big time on land development. Nairobi suburbs such as Eastleigh and Nyari have posted an increase in asking prices, a reversal from the previous trend of price drops making the two areas more appealing to investors looking for opportunities to enhance value. Despite the fact that these areas have over the years been prime and land has been hard to get, more and more owners are coming in to test the market, explaining why whenever land is put up for sale, it is sold quickly. According to Sakina Hassanali, the head of development consulting and research at HassConsult, Karen and Langata remain the biggest suppliers of advertised land in the Nairobi suburbs in the quarter, an indication that owners in these areas are cashing out to leverage on the current stable market prices. Ms Hassanali says that asking prices in Eastleigh and Nyari suburbs have been on a roll for at least one year now making Eastleigh the best performing suburb in the quarter with asking prices increasing by 7.2% over the quarter while Donholm takes the top performer on an annual basis with land appreciating by 16.4%. In addition, Syokimau is the best performing satellite town over the quarter with asking prices increasing by 5.6% as Juja turns to be the best annual performer with prices increasing by 31.1%. 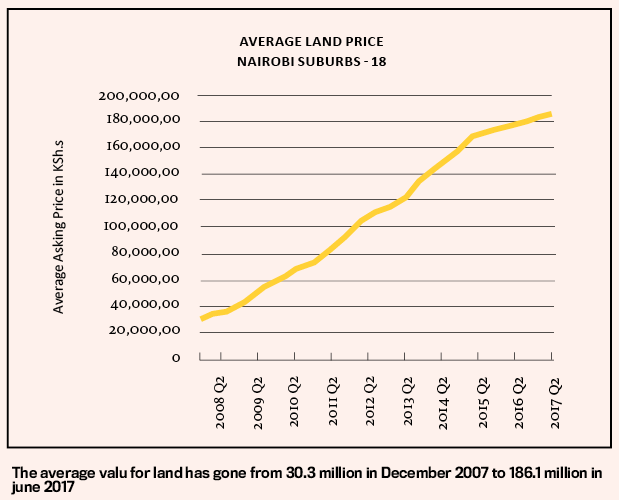 “Price had dropped to levels that are now attractive to investors who see the potential to unlock value,” says Hassanali. “But Eastleigh is now a strong performer thanks to investors who are coming back due to attractive land prices. Why Eastleigh is best performer because prices have been dropping and everyone is now moving back to that suburb. Price appreciation has slowed down thereby increasing investor interest for these suburbs. That’s why old suburbs are being put on the market. Property prices keep stabilising, and every owner’s dream is to get something.” Although asking prices have been sliding, with Karen being a heavy supplier over the years posting a double digit price of 10.1% to Sh58.2 million, Langata dangles Sh5.9 million to developers. In Nairobi’s 18 highest activity suburbs, the annual average land price have increased by 6.15 fold moving from 30.3 million in December 2007 to 186.1 million in June 2017. Supply of advertised land in Donholm for example, took up 1.4% of the market share with other suburbs such as Eastleigh (1.3%), Gigiri (1.2%), Karen (28.9), Kileleshwa (3.9%), Kilimani (6.6%), Nyari (2.5%), and Kitisuru (4.2%) just to mention a few, also remaining powerful as far as market share is concerned. Cytonn Investments in-depth reports two years back indicated that new roads and bridges, more reliable energy, and better intercity passenger connections are adding appeal to areas that have been labelled “inaccessible”. Back then, Edwin Dande, the firm’s managing partner and CEO said that their’s is about helping investors access the attractive returns in real estate and private equity, which are not easily accessible to a majority of investors. Mr Dande saw a hot market in the skyline – tapping bottom of the market, and putting up projects in areas that were previously densely populated and inaccessible – firmly ringing that towns like Kiambu, Limuru, Thika and even Ruaka are gaining traction as residential towns, due to their proximity to areas like Tigoni, Muthaiga and Runda. Look at the Eastern bypass driving up real estate developments and prices in the adjacent areas. Not to forget is the Northern bypass and its impact on real estate. Perhaps the main reason as to why land, especially the ones available in satellite towns like Athi River, Ruaka, Kitengela, among others are like hot cake. The drift is: land owners in areas which were once seen as remote and many of which are ancestral lands – try to picture satellite towns some 10 years ago – are worth a fortune by now. The latest HassConsults’ findings show supply of advertised land in Athi River taking up 6.4% of the market with Juja at 9.2%, Ongata Rongai (8.6%), Kiambu (5.6%), Kitengela (19.1%), Limuru (3.5%) and Mlolongo (1.8%); just but to mention a few of the 14 towns that the report focused on. It was very hard to find land being sold in the above-mentioned areas. In Karen for example, we are talking mostly ancestral land. And that prices have stabled at the moment, a lot of these parcels are currently being released to the market in what players in real estate sector attribute to what they call “liquidity crunch.” Ms Hassanali says: “Some may be liquidating land in those areas… Then, people are looking for affordable houses around those areas thus the reason why more and more investors are settling for satellite towns such as Syokimau, Nyari among others. And don’t forget that people are buying land in Nairobi to develop, and buying outside the city is usually for speculation purposes or for what I would call ‘land banking’. Land is in a strong asset class.” At a time when more and more investors are buying land because it is offering good return on investments, and a good place to store funds, what will drive demand is a question on many peoples’ lips. It follows this line that maximising profits would mean that everyone is brought on board, including the youth – people in business say, one sided expectation can harm business. A lot that is seemingly forgotten are the young people especially those who are, say, into their first jobs. Most people buy land as an investment and to own a house. Land has always been a strong performer compared to apartments and houses. But can the “broke” lot get a deal on these lands being sold in leafy suburbs if not the satellite areas? Smaller units for young people who are either employed or are into business and can space some cash for investments has been ignored. “That’s a very demanding segment (referring to the young and employed) but very under supplied. So that creates a lot of demand as no one is providing it. There must be smaller units for those who don’t have deep pockets. That’s what will help youths get opportunities,” says Hassanali. It is not always easy to make things happen, as players tend to take a back seat just to see how things pun out. Significantly, when all is said and done, elections will pass and business will quickly pick up pace. “There’s a drop ahead of the elections but new opportunities will emerge after elections. Buying activities has slowed down with investors putting a wait and see attitude just holding up. If we have peaceful elections, this will rebound around November.”