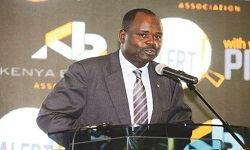 Chief Justice Willy Mutunga has cautioned that judicial independence must be protected not only from the influences of the Executive, but also from those of the legislature, civil society, family, religion and ethnicity.

“A judge cannot hold himself out as an agent of any interest as that would constitute a desecration of his oath of office,” he told a gathering at a book launch in Nairobi. “We must guard against institutional manipulation by business, civil society, family and ethnic interests,” he added.

Dr Mutunga said the launch of the book, Kenya: Democracy and Public Participation, was an important starting point for a national conversation on the health of the country’s democracy.

He cautioned that democracy is in peril when those in power are uncomfortable with the checks and balances institutions place on them adding that the pursuit and attainment of power must be counterbalanced by an appreciation of the restraints and limits to that power.

“Our new democracy signals a shift from the veneration of majoritarianism to respect for constitutionalism – a culture of inclusivity, respect for institutions and space for minorities in order to nurture a nation of equal opportunity,” the CJ said. He said that the new democracy departs from the rule of big men to government by institutions and a new season for the rule of law, consultation, and service.

The CJ called for a Parliament that robustly exercises its legislative and oversight duties, a Judiciary that exercises its interpretative mandate fairly and impartially, a civil society that is progressive in its mission, and one that works as the conscience of our democracy and a media which rightly asserts its freedom and independence.

He urged Kenyans to purge their institutions of the overweening influence of corruption and guard against institutional manipulation. The book was compiled by Prof Karuti Kanyinga and published by the Open Society Initiative in Eastern Africa in conjunction with the University of Nairobi’s Institute of Development Studies.