Politics
BY FRANCIS MONYANGO It is no secret that technology has disrupted the media industry. In the past few years, media houses have downscaled operations, leading to many loss of jobs and have also changed their approach and joined the muddy battle for clicks. Every media house now has an online news blog even though the quality of news that they post leaves a lot to be desired. In this new age, media houses do not just compete amongst themselves but also against blogs for traffic. As they say, all is fair in love and war. In this war, a huge number of blogs have resorted to posting sensational news so as to get views. This is because higher site views equals to higher ad revenue from online advertisers. But fake news hasn’t been an issue until the recent US Presidential election when its impact was seen. Whether it has the potential to destroy a candidate or make him, politicians are now keen on social media now than before. One may say that maybe because of their knack for finances (adverts) over news that main media is now losing their credibility. This has created an opportunity for random blogs who rushed to update readers with the latest unbiased news. Unfortunately, this news is usually biased. Social media is set such that the algorithms feed a user with ‘more of what they want’. Hence denying them a chance to access divergent opinions and material posted on the network. Suggestions have been made world over on the ideal remedy for this menace but in democracies, it is hard because it goes against the principles of free speech. The Canadian Supreme Court has held in a case to strike down a false news provision of law that the provision was contrary to the constitutional freedom of expression. “The reality is that when the matter is one on which the majority of the public has settled views, opinions may, for all practical purposes, be treated as an expression of a ‘false fact,” the Learned Justices of the Court said. 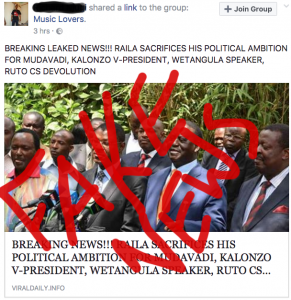 In Kenya, the law limits the right to freedom of expression to the extent that one is not allowed to spread propaganda for war, incite people to violence, hate speech and advocate for ethnic hate. These limitations also apply to the media according to Article 34. The same constitutional provision also provides for the establishment of the Media Council of Kenya. One of the roles the drafters of the Constitution envisioned this body to play is setting media standards while regulating and monitoring their compliance. It is with this powers that are expounded on in the Media Act that the Council accredits journalists while requiring them to follow the Code of Conduct for the Practice of Journalism. While the standards on accuracy, integrity and accountability apply to journalists; these standards do not apply to bloggers. Hence they cannot be held to have breached the Code when they post fake news online. From the angle of defamation laws, some of these stories are not defamatory. Neither do they constitute a breach of Article 33(2). For example the many speeches attributed to Presidents Robert Mugabe and Donald Trump about Kenyans and corruption. If they were to be counter checked against the elements of defamation, they will fail.  The statement might be false but not damaging per se, hence not warranting a suit for damages. Some of the sites are not even within the Kenyan jurisdiction and no claim of damage may be sustained against them Keeping in mind that this year is an election year in Kenya, the impact of sensational stories laced with ethnic chauvinism is a major concern to all. The Communications Authority of Kenya is already threatening an Internet shut down in the event people spew hate online. Recently, an ‘international’ propaganda website full of fake news on a Kenyan politician was exposed. The writer who hid under the name David Field was discovered to be a Kenyan techie. Even though it did not contain hate, the rising of such sites is a genuine cause for alarm. Solutions that have been fronted include presentation of scientific evidence and engaging in reasoned arguments. However, the society as a whole finds academics unpalatable overrated. Evgeny Morozov’s solution however is the most reasonable. In his article, Moral panic over fake news hides the real enemy – the digital giants, he writes that the only way we can deal with click baiting fake news is by making online advertising less in our lives, especially at work and in communication. While people may shun traditional media because of its links to politicians and corporations, they forget that the Internet companies they run to still act the same way. Perhaps the day we finally deny social media and search engines the clout they have in problem solving in all sectors including our politics is the day we will be free from the hazards of fake news online.