Burial insurance is a cash policy; this means that over time, it builds cash value. The premiums paid are constant over time and varying with the policy provider; it covers expenses like mortuary fees, hearse hire, flowers for wreath and any other miscellaneous costs.

There must be a difference between a financially literate person and the pack. Financial literacy and planning involve seeking information and knowledge to cushion you of events whose occurrence is eventual but we may not be ready when it does. Yet, both culture and religion (traditional African religion, Islam and Christianity) play a very central part in our lives and we strive to ensure upcoming generations do not lose their distinctiveness. The contest about funeral expenses has been recently rekindled by Kenneth Matiba’s death, Kenya’s political icon, who chose to be cremated, an exercise that cost Sh25, 000 as opposed to the opulent grand send offs we are accustomed to but that come with prohibitive costs.

Within the traditional African culture, we fear death and it’s a taboo to even talk about it, yet it is a contingency we must prepare for. The passing of a loved one should be a time of reflecting and remembering all the things that made this person special and not worrying the financial burden that await this final journey. The knowledge that your beloved will be buried with dignity and respect they deserve gives their relatives a peace of mind.

Traditionally, Kenyans from Western region (Luos, Luhyas and Kisii) are very communal, weddings and funerals bring out this side of them. Whenever any of the above mentioned occurs, relatives travel from far and wide to pay their respects and meet after being apart for sometime. For the urban dwellers, especially those in the far-flunked areas including Lamu, Malindi, Kilifi, Mombasa, Kwale, Nairobi, Naivasha and Nakuru, they have always formed communal welfare associations where they meet monthly just to catch up with one another.

During such meetings, agreed contributions by members are collected into an emergency fund, which is used whenever a member is bereaved. Such funds always catered mainly for the transport, coffin and feeding since the said communities believed and still do, in burying their dead in their ancestral land.

With increasing urbanization however, some members from these communities are changing with the times. In all honesty, the current yuppies are not so much inclined towards communal obligations and lately more welfare associations are losing out on members especially the youth due to huge age differences and a totally different outlook on life amongst the age groups.

Amongst such highly culturally inclined communities, death was not the end of life. The dead continue to live and protect their lineage when happy or harm when angered, albeit in a spiritual form. This meant that the dead had to be treated with dignity and given a befitting send off. Distant relatives who were even out of the country would be given time to fly home to come and attend the burial. It was taboo for close family members like a son or even daughter to be absent from their parent’s funeral if they were within distance of attending and efforts would be made to make them present.

Rituals signified a celebration of the role the dead played in society or to the family. The ‘right’ burial allowed the ancestors to rest peacefully and not to remain to haunt or even exert their power on the living but to protect them. Those who committed suicide would be buried away from the village with the least care so that the spirit would not hover in the area.

Death signified a physical separation between the living and the dead and the latter would join the ancestors. To join the ancestors, the living must have led lives that were upright and acceptable in the society and this did not include committing suicide. When an elderly African knew their time was almost up on earth, they would assemble their children and bless them, divide wealth and make peace. This was in a bid to ensure that upon death they would join the ancestors and to the bereaved, the fitting gift to the deceased was a decent burial. Failure to which, the dead would haunt them.

The burial would be an elaborate ceremony; the homestead became a beehive of activity and feasting, music and meetings dominated as relatives trooped in to pay their last respect. The elders would choose the site for the grave and it would be dug on the eve of the burial. Depending on the status of the bereaved, bulls would be slaughtered and a feast held over the entire period because they were celebrating a life well lived.

Upon death amongst the communities of Western Kenya, the house for the bereaved would be open to guests. The doors would never be shut during the entire period as guests trooped in with gifts for the bereaved. Crying and wailing was always allowed, you had to release the dead and let them go. The clan of the bereaved contributed to the cost of the funeral especially in forms of cereals for feeding the many people that would have assembled for the days the funeral would last, which depended on the age of the deceased – the older the deceased the longer the funeral.

Daughters of the bereaved family and the entire clan that had already gotten married would be tasked to come with either a bull of several goats. This helped in pooling together enough feeding resources to sustain the gathering. Every fell in place like a jigsaw and elaborate funeral burdens were never felt by the bereaved

Amongst the Muslims it’s a rather simple process. They believe that once an individual passes away, it is only fair you release them immediately and that’s why they are buried on the same day. A simple process where the body is washed and respectfully covered then placed in a ‘sanda’ lying on the right hand side. The dead is immediately allowed to go and face their judgment through an immediate burial.

A lot has since changed, however. Due to the increasing vagaries of modern life where resources are increasingly becoming scarce against population explosion, the life set up in the society has moved more towards individual, than communal and funeral and burial costs are becoming unbearable every sunrise. 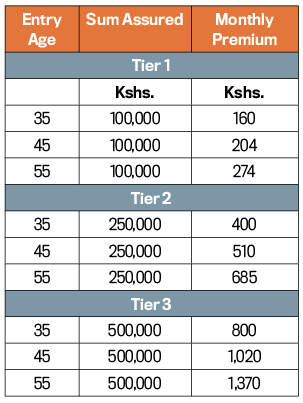 Consequently, insurance companies, seeing the struggle, have tried to cash in by introducing funeral insurance policies. Speaking to several insurers, however, they admit that the uptake of such policies have been very low and even those who have them remain highly reserved to speak about it.

According to a sales executive from Britam who spoke to this writer, a majority of those he has sold the policy to are educated young individuals who are purchasing the policies for their parents. It is a group that has the financial knowledge of the burden of the funeral and burial activities to the deceased.

If they can plan for their lives i.e. buy education policies, pay mortgages and plan for holidays then why can’t they plan for death? Interestingly, the sales executive notes that seldom do they buy their own funeral insurance policies but rather for their parents and even elderly relatives.

It is this foresight that reflects a paradigm shift. Interestingly, the Luos are increasingly taking it up amongst the communities he has handled and he admits that amongst this community, it is the aged and highly educated who are purchasing the policy.

What strikes him most is that members from Central Province are very open to the policy. They freely discuss it and it’s easier to sell it to them as opposed to Luos, Luhyas, Kisiis and Kalenjins. The Coastal people especially the Mijikenda are the worst; it is almost unheard of amongst them to even consider planning for the death of a beloved family member in the name of taking a policy.

The general driving force for taking up the policy amongst his clients is that many who have it are already individuals who have other policies. It points out that these are folks who are well organized with their finances and value planning for the future. It shouldn’t shock you if your highly educated son has already taken one for you. This does not mean they’re contemplating your death, it only means they are cushioning themselves financially of this eventuality.

The table above shows how low the premiums for funeral insurance are begging the question-why are we not embracing the phenomenon?