Cover Story
BY ANTONY MUTUNGA The prediction of the global economy collapsing by David Wilkerson in 1973 may come true as it moves further into turmoil. Mr Wilkerson predicted that the world economy would recede due to an economic confusion. He had also prophesized about the default of Greece and with him not being wrong about that, we may be about to witness another global crisis. In 2008, the world was hit by a financial crisis that caused adverse ripple effects that are still plaguing the global economy to this day and with an end nowhere in sight. People thought after the 2008 crisis everything had gone back to normal, but the unpleasant truth was things had gotten worse. The central banks that were the heroes who flew in for the rescue during the last global financial crisis are having a difficult time this round, coping with the new threat of falling emerging markets, high inflation, increasing interest rates and plummeting stock and oil prices. Maurice Obstfeld, Chief economist of the International Monetary Fund (IMF), in a report said, “The global economy is too slow for too long.” One of the biggest emerging markets, China, is the major reason behind the crisis that is escalating in the global economic growth in 2016. After the financial crisis that shook the world eight years ago, China tried to get its economy back on track as its demand to developed countries had greatly decreased. This led the country to investment in infrastructure and start consuming their resources. This was a good strategy to overturn the effects of the 2008 financial crisis in the country but it did not all go according to plan as the country started facing a domestic crisis. As China had placed most of its resources in the real estate sector, the yields it returned were very low as the record of unsold houses in the country was very high which left the country in debt. This in turn caused the country to reduce its imports from developing countries, especially in Africa, causing the pricing of the commodities to greatly reduce because of a market surplus. This has now taken its toll on the developing countries that were exporting to China making them to lose market for their commodities and resulting in stagnation in development and, in some cases to even recession. According to the Institute of International Finance, more emerging markets, like South Africa and Brazil, are losing money as investors are pulling. In 2015 for instance, investors pulled over 600 million dollars from the emerging markets. This is caused by the central banks. When the US Federal Reserve, increase their interest rates, for instance, it causes the financial markets to be at the brink of collapsing which in turn discourages investors from investing. This is a major death blow as emerging markets are considered drivers to global economic growth. “Emerging economies like Brazil, South Africa, Thailand, and Turkey, rather than China, will be the major sources of concern in 2016,” said economist, Barry Eichengreen adding that “With their high levels of short-term debt, these countries are vulnerable to currency crisis, potentially leading to an economic collapse.” The IMF also reported that the decrease in capital inflows was due to the difference between advanced economies and growth prospects of the emerging markets. This is a major concern as emerging markets, according to the IMF, account for 70% of the global growth, which is a large contribution but a decline for the fifth consecutive year. IMF managing director, Christine Lagarde has warned that the ripple effects of the slowdown on emerging markets are hitting the advanced economies hard leading to a slow global economic growth. As many nations start to produce and use their own oil, its price has greatly reduced and the more countries domestically produce oil, the more prices will continue to fall and eventually so will the global economic growth rate. When the U.S decided to increase its domestic oil production and shale industry, the demand for oil greatly reduced and it was decreased even further when China’s economy started to slowdown, reducing its imports. The decreasing oil prices are causing food and commodity prices to decrease which will affect the global economic growth negatively making it to decrease. This is also causing an economic collapse in some member countries like Iran and Venezuela that are part of the Organization of the Petroleum Exporting Countries (OPEC) which depend on oil as their major export. Apart from this, some countries like Russia and China agreed to trade oil in another currency other than the dollar, which is the universal currency. This shift to use another currency further destabilizes the global economy. The other major concern that will definitely cause a slowdown in the global economy is the financial instability that is affecting the banking system of various economies. In the U.S.A, low oil prices have caused companies that were producing oil at a higher price to enter a crisis of their own as they record low returns, which in turn causes them to be unable to pay the big loans that they acquire from banks. This leads to financial instability in the banking system. 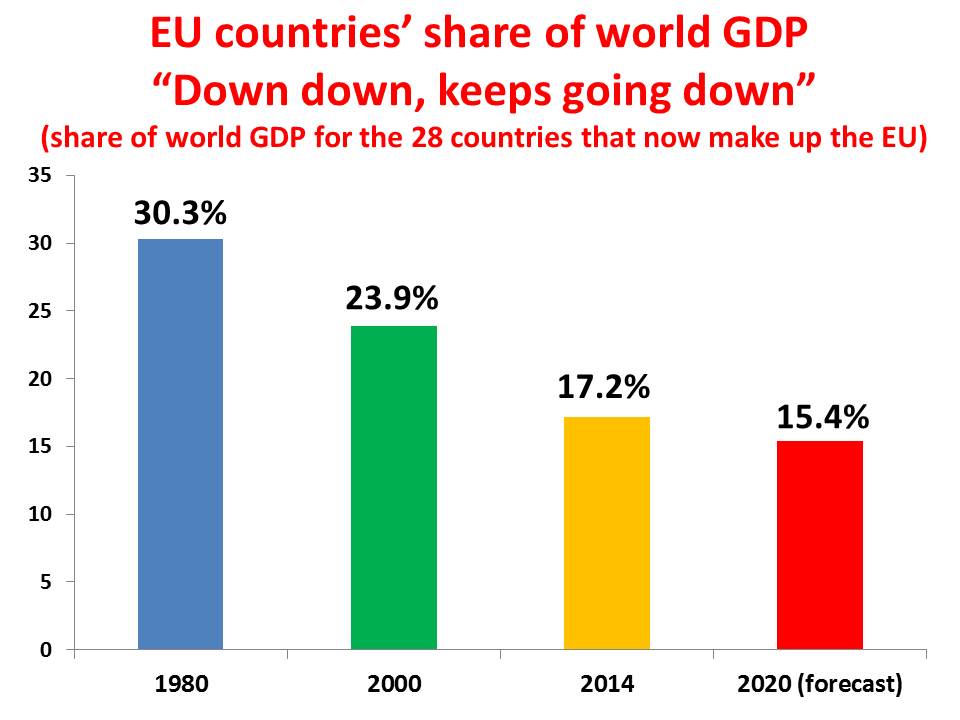 The case is worse off for Europe as most of the banks are shaken up due to bad loans. This causes the European zone to bail out the countries that are holding a sovereign debt which causes the zone. Germany being the driving force of the European zone has not been spared either since in January, CEO of Deutsche bank, John Cryan at a press conference had to take the unusual step of publicly reassuring that the bank’s finances were “rock-solid” after investors pounded the bank’s stock. To make matters worse, the European zone is in a state of worry due to Brexit (Britain’s Exit), a policy by the U.K to leave the European Union (E.U). The final decision is to be made June this year. If this is to happen then the European zone will face a crisis and with its contribution to the global GDP already diminishing, the effects of Brexit will only make it decrease faster causing a slowdown in the world economic growth. The evidence greatly points to another global economic slowdown in 2016; even though it may not be as bad as the financial crisis eight years ago it is surely going to shake the world. As a lot of different problems creep up all over the world, global leaders need to step into action and come up with solutions because the more these problems are underestimated the more chances that the slowdown will turn to a worldwide crisis.