Following the pending legal case in regard to the Kenyan Government’s Housing Fund levy, Principal Secretary for the State Department of Housing and Urban Development, Charles Hinga announced that Kenyans can begin voluntary contributions, which according to the Housing Fund Act, shall not be less than Sh200 per month. This is to kick start contributions from willing individuals, especially the 225,000 Kenyans registered on the Boma Yangu portal, a symbol in itself of their interest in the Affordable Housing Scheme.

Operationalization of the institution is, therefore, set to be backed by voluntary contributions and Sh5b seed funding from the National Treasury as provided for in the National Budget 2019/2020. As it is, the Housing Fund levy is likely to have a long court process, which might delay delivery of the affordable homes especially considering the time sensitivity of the Kenyan Government’s plan to deliver 500,000 units by 2022.

If approved, the government plans to use funds from the Housing Fund to bring on board private developers by providing off take guarantees, with funds expected to be collected through public statutory contributions set at 3% of employees’ gross salary shared equally by employees and their employers. The government targets Sh55b in the first year from approximately 2.5 million employees, and subsequent increases thereafter as the number of contributors continue to grow. However, the majority of the country’s population remains against the mandatory contribution, due to: The perceived burden on those who already own homes or are currently servicing a mortgage; The increased wage bill for employers; The imposition on the formal sector alone, and not the whole public, and, the ballot-based system meaning not all contributors will benefit from the scheme.

The government aims to deliver 500,000 homes against at least 2.5 million contributing Kenyans, therefore leaving 2.0 million out of the affordable housing program. 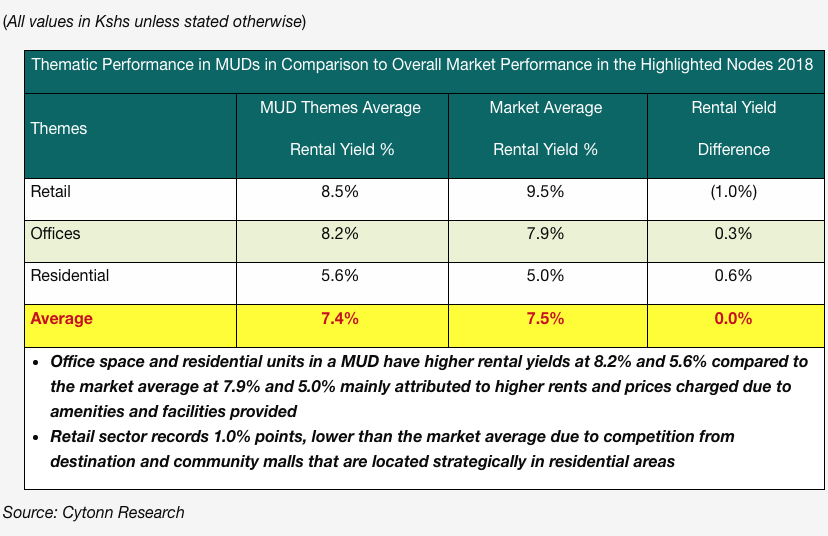 Kenya Power Pension Fund (KPPF) last month invited bids for a mixed-use residential development partner to undertake the development and funding of its 3.3 acres of land located along Naivasha Road, Lavington. The pension scheme’s goal is to put up a high-rise mixed-use residential and commercial building at an estimated cost of Sh1.4b, through its real estate trading company, Sakile Properties.

The fund, which typically invests in high-end and upper mid-end properties in Nairobi, has completed projects such as Bogani Park in Karen, Loresho Ridge, and Runda Park. As the local real estate market peaks, we have witnessed increased supply of office space, retail space, and residential units, especially in the upper segment of the market, against shrinking demand, resulting in increased competition among developers and thus subdued returns.

In order to differentiate their products, we are now seeing more developers undertaking Mixed-Use Developments (MUDs), which integrate various uses (residential, commercial, hospitality, retail, etc.) into one so as to maximize land use whilst increasing uptake through creation of a live, work, play and invest environment for building occupants. According to the Cytonn MUD Report 2018, office space and residential units in MUDs have higher rental yields at 8.2% and 5.6% compared to the market average at 7.9% and 5%, respectively, mainly attributed to higher rents and prices charged due to amenities and facilities provided.

Local pension funds have been increasing their real estate investment portions owing to relatively high returns in the sector, which currently stand at a five-year average of 20.1%, in comparison to 8.7% for other traditional asset classes. As at December 2018, pension schemes in Kenya had total assets under management at Kshs 1.2 tn, an 8.0% increase from Kshs 1.1 tn in December 2017. However, real estate investments make up only 19.7% of their investments, 1.5% points decline from 21.2% in 2017, owing to an increase in assets and a marginal change in real estate investments. This is despite the Retirement Benefits Authority allowing the schemes to invest at most 30.0% of their assets in real estate.

The government declared Tatu City, through a Kenya Gazette Notice, a Special Planning Area (SPA), which means the master-planned city will be under state control rather than county authority.

As per the Physical Planning Act, a Special Planning Area essentially means an area that cuts across boundaries of two or more local authorities and which has spatial or physical development problems. The national government’s intervention follows Tatu City’s brawls with the Kiambu County Government that has led to delays in construction approval processes for the 5,000-acre development, unnecessarily prolonging its development timelines.

So far, completed projects developed within Tatu City since its commencement in 2015 includes Nova School, Crawford International School, various industrial parks, and residential projects such as Lifestyle Heights. Therefore, the move will fast track Tatu City’s materialization by allowing for fast planning and cutting construction approval bureaucracies for homeowners within the project while also paving way for the development of Tatu City’s Local Physical Development Plan whose key aim is to ensure coordinated and progressive development of the area in order to ensure health, safety, convenience, and the general welfare of its inhabitants.

As per the gazette notice, Tatu City is also required to establish and operationalize a one-stop shop within the city to facilitate the processing and issuance of development and construction permits and certificates of occupancy as required by the Special Economic Zones Act The SPA status, which is rare for private developments, indicates Tatu City’s unique potential for the overall country’s economy and is a step in the right direction towards protecting private developers from the often unfair government bureaucratic processes which tend to elongate development timelines, negatively affecting real estate investment returns.

According to the National Treasury, revenues from stamp duty tax for the year ending June 2019 are expected to fall by 21.5% to Sh9.5b, from Sh12.1b collected in the year ending June 2018. In our view, this is mainly as a result of the exemption of first-time homebuyers from the tax, which was effected in July 2018. The decline is also coupled by sluggish property uptake in the current year owing to tough economic conditions. As per the Cytonn Q1’2019 Markets Review, annual uptake for the Nairobi Metropolitan Area declined by 2.9% to an average of 20.8% from 23.7% in June 2018.