Money
By Victor Adar There has been a sharp decline on growth of banks after interest rates capping law took effect last year. But amidst the unfavourable business environment, KCB Group takes the top position as the most attractive bank pushing Equity from top to position three thanks to a strong franchise value and intrinsic value score as per latest Cytonn Investments banking report. The franchise score measures the broad and comprehensive business strength of the company and the intrinsic score measures the investor return potential. National Bank ranked lowest in both franchise and intrinsic value score. Themed Consolidation & resilience in a challenging operating environment, the report was largely based on analysis of the results of the listed banks in the past year so as to determine which banks are the most attractive and stable for investment from a franchise value and from a future growth opportunity perspective. According to Elizabeth Nkukuu, CFA, Cytonn’s chief investment officer, two core trends stood out from their analysis. Firstly, consolidation is happening and will continue to happen – the last two years alone, five bank transactions have taken place. Equatorial Bank, Giro Bank, Oriental Bank, Fidelity Bank and Habib Bank have all been acquired and the common theme is that they are all Tier III banks. Secondly, even though the operating environment was tough last year, the banking sector remained safe and sound. Sector core earnings for 2016 grew at 4.4%, better than the 2.8% for 2015, and net interest margins also increased to 9.2% in 2016 from 8.7% in 2015. “The industry will become more stable where only the banks with a strong competitive advantage, either in capitalisation, deposit gathering or niche shall remain, with the remaining banks forced to either merge or be acquired. The sector is shaping up to prudence in operations, while key issues such as increased loan loss provisioning and the regulated loan and deposit pricing framework will lead to a more resilient sector in a challenging operating environment,” says Ms Nkukuu. 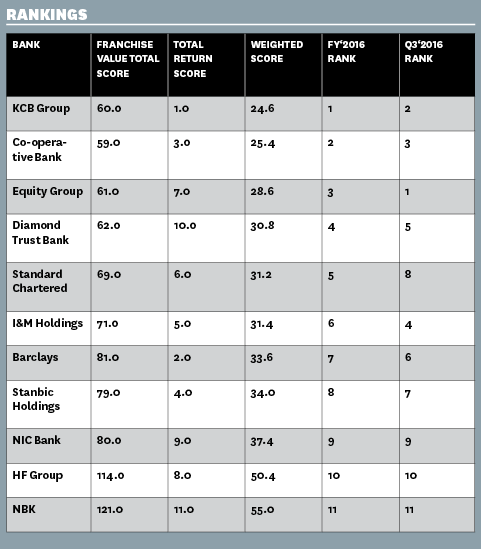 Equity Group dropped by 2 spots to position 3 from position 1 in our as shown by the banking sector report, being weighed down by an expensive valuation based on the so called “Price to Tangible Book Valuation” at 1.7x, above industry average of 1.0x, and low deposits per branch at Sh1.3 billion, below the industry average of Sh3.4 billion, indicating a lower level of efficiency in utilizing its extensive branch network to mobilize deposits. Standard Chartered Bank rose 3 positions to position 5 from position 8 as a result of its franchise value boosted by high deposits per branch at Sh4.7 billion above the industry average of Sh3.4 billion, and a strong tangible common equity ratio of 17.0%, above the industry average of 14.2%. Kenya’s listed banks recorded a 4.4% core Earnings Per Share growth, compared to a growth of 2.8% in 2015. Most banks recorded negative growth with only Standard Chartered Bank and Diamond Trust Bank recording double digit growth at 43.9% and 16.6%, respectively. The other banks that recorded positive growth are I&M Holdings and Co-operative Bank growing at 8.4% and 8.3%, respectively. Deposits grew at a slightly faster rate than loans during the year, which carried forward the trend witnessed in 2015. The loan growth was low as the private sector credit uptake recorded a 17-month decline to 4.0%, and also banks adopted more prudent credit risk assessment frameworks to ensure healthy loan books. Consequently, the non-performing loans ratio rose to 8.4% from 6.1% in 2015. Although banks were able to protect their net interest margins, even registering an increase to 9.2% from 8.7% in 2015, the full effects of the Banking Act (Amendment) 2015 that regulates the loan and deposit pricing framework are yet to be felt, and 2017 will provide a much better picture on its impact. The increase in non-performing loan (NPL) ratio to 8.4%, from 6.1% in 2015, highlights increased risks around asset quality in the sector, with banks having taken a prudent approach based on a stringent risk assessment framework, according to Maurice Oduor, Investment Manager. “All listed banks recorded a positive return on equity to average 19.9% from 17.1% in 2015, supported by the favorable macroeconomic environment that prevailed in 2016 as opposed to 2015, which was characterized by a tough operating environment,” says Oduor. The sector has remained resilient by adopting a prudent banking approach. Consolidation is set to gather pace as key issues such as increased loan loss provisioning and the regulated loan and deposit pricing framework prevail in this challenging operating environment. This will transition the industry into one with fewer, but stable banks, leading to a more efficient and stable banking sector.