Cover Story
BY LUKE MULUNDA Take a moment, if you like, and observe the next presidential political rally. Chances are you will see lots of hopeful people and hear loud propaganda and enticing campaign pledges. Take a keener look and you will identify the presence of money almost everywhere – from body wear, campaign paraphernalia, entertainment to the unseen logistical works. Elections are about financial might as much as political power. Every serious political party often has a financial war chest to fund its operations and campaign. In Kenya, 2017 is no exception. With a General Election billed to be decisive for the top two presidential candidates – incumbent Uhuru Kenyatta and Opposition leader Raila Odinga – parties are going for broke to win over voters and, hopefully, win the election. In a winner-take all democracy, with slim chances of parties sharing the spoils, money speaks – and when it does, voters listen! Billions are being spent on elections by various players, especially so for those vying for top seats. This year heavy spending began way back in the primaries, two months ago and is expected to hit the climax as August 8th approaches. With some 15,000 candidates set to battle it out for 1,882 elective positions, the highest number of candidates in Kenya’s history, the stage has been set for the country’s most expensive campaign ever. The figures are mind-boggling. Kenyatta and Odinga alone are estimated to have spent a combined $340 million (Sh34 billion) on their 2013 election campaigns, five times the amount recorded in 2007, according to more realistic analysts. They are expected to spend more than this figure, topping Sh50 billion, with Uhuru billed to emerge the biggest spender. This is way above conservative estimates of overall Sh50 billion spent in 2013. Heightened spending will push the combined expenditure for all candidates further high in the neigbourhood of Sh100 billion, given that most positions have attracted more candidates from Governor, to MP down to the very competitive Member of County Assembly (MCA). But does this overzealous spending help the economy? Economists are often divided, qualifying their stand with a “but”. The most obvious impact of lots of cash being injected into the economic system is the issue of inflation. With more money, people are likely to get more reckless and more demanding, thus pushing up prices and eventually the inflation rate. Too much cash in circulation distorts markets and it is likely to happen during and the period immediately after elections. “Record election spending is expected to boost economic activity around election time, while driving the inflationary pressure, on the upside,” says Christopher McKee, the CEO and owner of the PRS Group, a leading global provider of political and country risk forecasts and analysis, with offices in Syracuse, New York. While the electioneering season can be a godsend for some enterprises, it is not all-good news for the economy as a whole, according to Prof Edward Kisiang’ani, a political analysts and lecturer. He says increased inflation, heightened political risk, lower value from the labour market with energies diverted to politicking, and relaxed enforcement of laws as the vote-seeking incumbents focus on political expediency are just some of the negative effects on business. “Overall, elections are bad for the economy because they tend to support ‘cash cows’ and ‘cash traps,” he says. These are enterprises that yield profits in the short term but have no long-term future or benefit for the wider economy.  Economists argue that ‘cash cows’ and ‘cash traps’, which tend to succeed during elections, flourish at the expense of ‘star’ and ‘question mark’ enterprises that either earn good profits or offer the potential, with suitable investment, to provide sustainable long-term growth and therefore aid the economy. Indeed, with billions of election cash already circulating, hundreds of new businesses have cropped up and many are still mushrooming to get a piece of the pie. The money goes into various activities all aimed at oiling the campaign machinery of the various candidates. The main political parties have hired international consultants, propagandists, are running bulging campaign kitties and invested in modern technology to track election results and general communications.

Both Jubilee and NASA have crafted watertight campaign strategies run by secretariats with private sector models. Execution of these campaigns will cost billions of shillings to implement. Mr Johnson Sakaja, a statistician, ruling coalition’s nominated MP and an aspirant for Nairobi Senator on Jubilee Party ticket says a successful presidential campaign requires about Sh5 billion ($50 million). “Sometimes this figure can go up. Media and publicity take the lion’s share of the budget,” he says. Other major budget items are campaign merchandise, advertising, communications, transport, accommodation, research, human resources, event organizing, operations and lobbying. 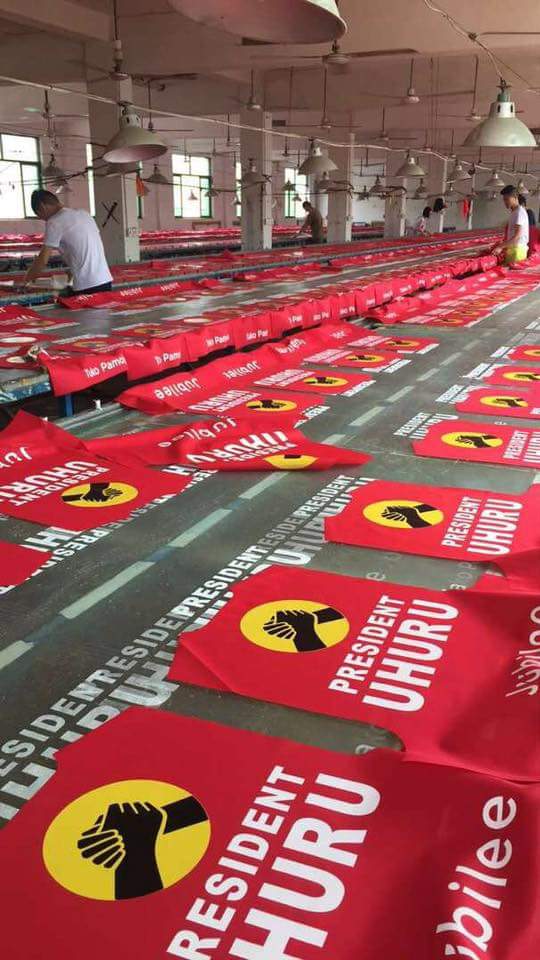 In addition, leading politicians have also bought helicopters and four-wheel drive vehicles to ease their movements across the country during the campaigns. Hiring a helicopter is not kid’s play: it costs about Sh250, 000 per hour, inclusive of fuel and the pilot’s remuneration. The governors’ treasure trove A campaign budget for a gubernatorial aspirant for the just concluded party primaries seen for a county in rural Kenya was rounded off at Sh300 million ($3 million), according to the East African newspaper, but the figure could double when official campaigns begin. This means that to become a governor, a candidate should have at least Sh600 million ($6 million) to mount a successful campaign. With 47 counties and more than three gubernatorial aspirants in each county, the total average for the seat of governor alone, is mind-boggling. Pumping such money in an economy is unprecedented in Kenya. New millionaires will be made and they will roil markets by splashing on consumer goods, to luxury stuff and even real estate. Prof Kisiang’ani says Kenya’s biggest economic hurdle right now is the upcoming General Election. “Elections are always a time of uncertainty for Kenya.  The election fever currently being experienced as the country is gearing itself for the 2017 elections has dampened the investment mood of the country as most investors are practicing the wait-and-see approach,” he says. Reports by economists and analysts say that investors are waiting to start new projects or put more money into existing ones after the General Election. In 2017, the pace of growth should thus remain flat, at about 5.6%, last year’s rate of expansion. Government officials had previously given an optimistic projection of 6.0%. Elections have been bad for the Kenyan economy in the past. The economy slowed or remained stagnant through three of the five multi-party elections held in Kenya. Data shows that in three out of the five multi-party elections Kenya has held since 1992, the economy either slowed or failed to grow. In 1992 the economy shrunk by 0.8% and only grew by a paltry 0.5% in 2002. During the run-up to the 2007 elections, it grew by an impressive 7% (the highest in the last 20 years) before tumbling to a measly 0.25% in 2008 as a result of the post-election violence. In 2013, economic growth remained at a steady 5.7% although economists had predicted higher growth. Logically, there is a higher chance the economy will slow down this year given the aftershocks the business environment has been feeling following the prolonged period of intense political activity. Yet some see opportunities in the election as well. “Assuming certain conditions, this should hopefully be a good time to make your capital markets and related structured investments as the market is seemingly on an artificial lull, ahead of the general elections,” says Sanlam Group Investment Economist, Mr Arthur Kamp. Who’s got the cash? The most interesting, if not disheartening thing about this election is the fact that a good chunk of this money will end up in foreign countries, especially China, which has proved a cheaper destination for business. Most printing jobs are being outsourced to China and sources in the campaign team say all the presidential candidates and a good number of governors are producing their merchandise in China. “We are just getting small businesses from MPs and MCAs, nothing much,” Gilbert Mogeni, a printer based on River Road in Nairobi says. “Most of the work is being done in China.  He said China is cheaper compared to local printers due to high production costs in Kenya. While outsourcing sucks money out of the economy, it is also playing a stabilizing role by balancing the circulation of money and thus could keep check the inflation rate. Regulating party financing There have been attempts to curtail election spending and regulate campaign financing in Kenya. Late last year, the Independent Electoral and Boundaries Commission (IEBC) attempts to implement the Electoral Campaign Financing Act was rejected by political parties and a parliamentary committee, and later suspended by the High Court. IEBC’s directive required political parties — and all candidates — to provide the Commission with their campaign bank account details, provide names of their campaign team members who would be signatories to the account, provide their books for inspection to the IEBC, and submit a final expenditure report three months after the General Election. The Elections Act and Political Parties Act ban anonymous contributions, whether in cash or in kind. A candidate or political party is not supposed to receive more than 20% of their funding from a single source; no one person or organization shall, in any one year, contribute to a political party an amount exceeding 5% of the total expenditure of the political party. These laws are never observed. Under the Political Parties Act 2011, the Registrar of Political Parties may at any time request the Auditor General to carry out an audit of the accounts of a political party, and those in violation may be de-registered. The law’s implementation status remains unclear. Meanwhile, the election machine keeps spewing out more money.