Property
By ANTONY MUTUNGA and David Wanjala Real estate has been a boom in Kenya for a while now, contributing 7.6% of the GDP. Investors have been bringing up buildings with the aim of satisfying the growing population that demands almost 250,000 housing units per year. However, with the prices of houses having gone up over the years, most people have turned away from high-end buildings to apartments. According to the Kenya Bankers Association (KBA) Housing Price Index, in the fourth quarter of 2016, apartments accounted for 60% of total sales while Maisonettes and bungalows accounted for 23% and 17% respectively. This was attributed to the fact that buyers found apartments to be cheaper compared to bungalows and Maisonettes. This has also seen investors shift from building Maisonettes and bungalows to focusing on apartments, especially in the lower and middle market end. It has reached a point whereby some owners have eventually resulted to giving their tenants notices in order to tear down their mansions and bungalows and in turn put up apartments. Antony Kiarie is such a victim after the owner of the bungalow he was living in in South C, Nairobi, gave him a notice to vacant, with reason that he wanted to demolish the stylish house and instead build an apartment. Most investors are being attracted to apartments, which they believe to be cost effective as they efficiently use available land. 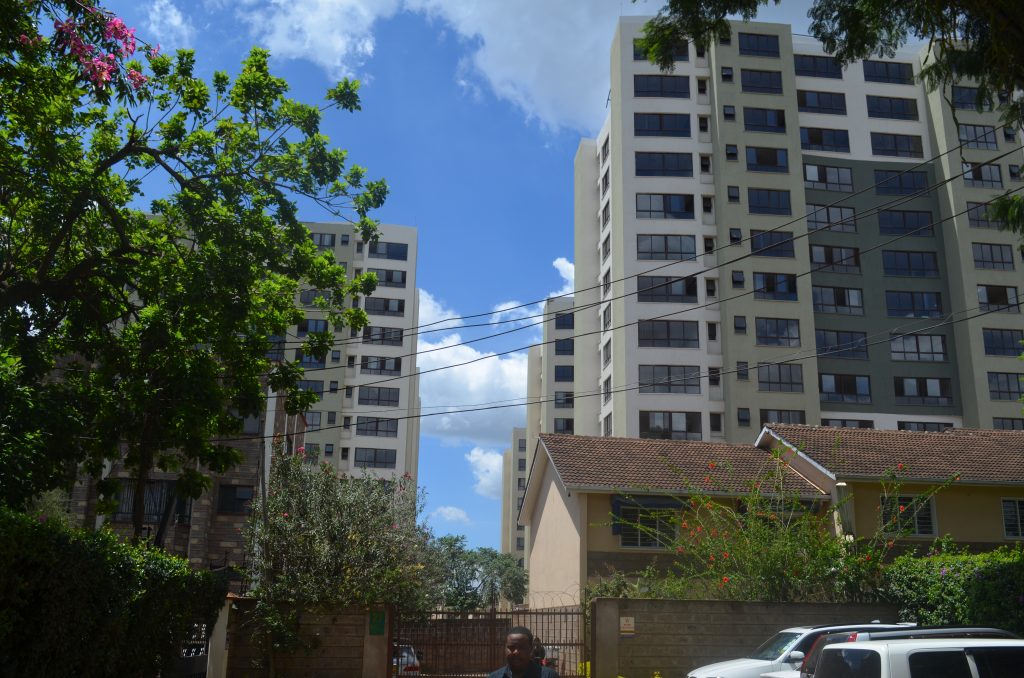 However, this being true, when one looks at the bigger picture things are not all well and good. As a result of most investors jumping on the ‘apartment bandwagon’, it has left the Nairobi suburbs littered with houses creating a surplus. In addition, there is the risk of most of the houses not being built safely as the developers are in a hurry to finish the houses before their competitors, putting tenants at risk. An example of such is the 50-unit apartment block in Ruaka, which is sinking as a result of poor workmanship. Apart from this, most of the apartments ignore the need for ample space. They are squeezed together to the point that there lack any room for garbage disposal areas thus most tenants end up throwing garbage over their balcony’s at night causing the surrounding to be unhygienic. In order to deal with the garbage menace, tenants have to incur additional expenses, which becomes a burden for all living in the apartments. Overstretching social amenities However, the biggest challenge is the pressure the new high-rises exert on the limited available amenities including sewerage systems, water and roads. When a an eight storey apartment of double and single bedrooms and some times single rooms with a capability of up to 16 houses on a floor (like the ones in the photos taken in Nairobi’s South B) sprouts, holding up to 128 families in a compound that initially hosted a single family in a three or four bed roomed bungalow, it is obvious that the aforementioned social amenities will be strained. First the neighborhood will never again know fresh air owing to leaking and bursting sewer pipes and piling heaps of garbage. Then there will be the inevitable scarcity of clean water; crowding and sprouting of kiosks that eventually harbour criminals – a sure way of degenerating into a slum dwelling In an effort to solve the sewer problems, owners put up septic tanks, which end up filling up very fast due to the high number of people living in the apartments. Frustrated, the landlords then turn to exhauster services in order to pump out the waste, which due to the high number of tenants has to be done often. As the owner incurs the high cost of paying for the exhauster services, the burden usually shifts to the tenants whose rent goes up to cover costs. However, worst of all is when most of owners decide that they cannot incur the high costs and decide to pump the sewage to the ditches that lead to the drainage systems alongside the roads. The rise in number of highrise flats in former Nairobi suburbs like South B, South C, Parklands, Kileleshwa just mention a few is excellent as it helps sort housing issues in the capital city. However, it is important to ensure that the social amenities are equally expanded alongside the new structure to respond to the needs of the increasing populations in the affected areas.