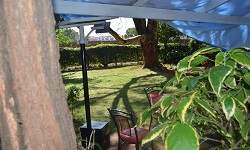 Anti-terror war off the mark

Why is Kenya so vulnerable to terrorist attacks as opposed to other countries in the region, especially Uganda, that also have troops in Somalia?

We are seeing a lot of blame game, from ethnic and religious profiling to corruption within security agencies and Department of Immigration. But what everybody fails to mention is that Kenyan security agencies are working at cross purposes, with different goals and instructions.

While the problem of terrorism in Kenya is real and most citizens, especially those working in the media have been careful not to undermine the security agencies in their work, the counter-measures are hardly a deterrent.

Proper scrutiny of the operations of the security forces since the Kenya Defence Forces (KDF) entered Somalia in October 2011 reveal that one hand does not know what the other is doing, leading to a physical clash among the security agencies as witnessed during the Westgate attack.

Ben Lawrence, a writer who has worked within the Dadaab refugee camp for years argues that Kenya’s paramilitary agencies are not working within the script that guided KDF’s entry into Somalia. “If the aim of KDF is peace in Somalia, why are other agencies operating in a way that is contrary to this bigger picture,” he queried.

Currently, there are four ways in which Kenya is fighting terrorism. They include civic education to prevent youths from succumbing to Al Shabaab recruiters. The second is the Anti-Terrorism law that is used by the courts to prosecute suspected terrorists. The third is surveillance by the Anti-Terrorism Police Unit and the regular police to neuter planned attacks. Then there’s direct military through KDF presence in Somalia.

Yet, even leading figures within the Jubilee government have equally come to accept that the KDF, the National Security Intelligence Service (NSIS), the Anti-Terrorism Police Unit (ATPU) and the regular Police have not been working in tandem.

Keriako Tobiko, the Director of Public Prosecution, has also conceded that lack of proper co-ordination in the country’s security system is hampering the fight against terrorism. He argued that the Police are under-equipped and under-staffed, a clear indication that they are not fully up to the task.

Senate Majority Leader Kithure  Kinditi has since responded by sponsoring a bill that seeks to enable different security agencies to share information from a common pool.  The National Emergency Security Bill 2014 intends to house all security agencies under one roof to ensure multiple agency approach in the surveillance of security.

KFD had a three-dimension approach when it entered Somalia but these principles are hardly replicated locally. The first goal was to hit the Al-Shabaab in Somalia and break their cells that act as breeding grounds for future attacks in Kenya.

The second was a geopolitical approach as Al-Shabaab is a threat to regional trade and economic integration among members of the East African Community (EAC) and beyond.  The third dimension is centred on Kenya’s role in the global war on terror since the 1998 bombing of the American Embassy in Nairobi.

Despite these clear-cut approaches, Kenyan security agencies tend to operate on knee-jerk reactions, such as swoops, frisking and deportations targeting the Somali community.

For instance following a series of attacks across the country, the government has launched a crackdown on supposed criminal and terrorist elements in the name of Usalama watch, but one which actually appear to target the country’s minority Muslim and Somali population and the Muslim youth at the coast.

There is so much laxity and corruption which allows rogue elements to enter the country with dangerous weapons, plan for long and attack without detection. Experts in the war on terror say that the effective ways of fighting terrorists is to detect them at the surveying stage. It is a known fact that terrorist cannot strike without proper survey and planning

According to opposition leader Prof Anyang Nyong’o, the mere presence of hundreds of illegal immigrants within our borders, who entered without our notice, is in itself a manifestation of serious lapses in Kenya’s security, intelligence and immigration system.

Civil society members have also accused the government of not only applying wrong approaches to the war on terror but also violating civil liberties and human rights in the process. Al-Amin Kimathi, the Executive Coordinator of the Muslim Human Rights Forum goes ahead to accuse the media of complicity with government by swallowing official security briefs without questions.

He argued that the media need to scrutinise official United Nations reports produced by experts because some of them end up creating stereotypes which are given currency by the media. One of the official line gaining grounds is that Kenya is faced with the emergence or radicalised Muslim youth that feel deprived in society and are also looking for inspiration across the border in Tanzania.

As it is, there is growing concern within Kenyan security agencies over the emergence of local terror groups comprising Muslim youth in Mombasa with reinforcement from Tanzania and with logistical support from Al Shabaab and al-Qaeda.

However, security experts argue that the tendency by state apparatus to apply military approach to such threats has resulted in hardening of positions, as has been seen in Mombasa where Muslim youth have resorted to ousting Imams who are perceived moderate.

“Some of the youth have genuine grievances such as marginalisation, poverty and pending land issues and there is an element of rallying the Muslim all over the region to fight for a common cause. But failure to address these issues sufficiently has resulted into a situation where the youth become radical for the sake of it and their initial grievances are lost in the process,” said Dr Emmanuel Kisangani, a senior researcher with the Institute for Security Studies (ISS).

Apart from the controversial issues of marginalisation of coastal people and Muslims in Kenya, similar sentiments are emerging in Zanzibar and Pemba where Muslims have been calling for secession from the mainland Tanzania.

Experts say that socioeconomic drivers of radicalisation in Kenya include real and perceived marginalisation and exclusion from national resources, frustrated expectations, relative deprivation and perceived injustices.

Many of the attacks on civilians in Kenya since KDF entered Somalia in October 2011 have been carried out by local Kenyan nationals and not Somali-Kenyans or Somali nationals as is often portrayed.

Abdulrahman Wandati, the executive director of the Muslim Consultative Council blames the Kenyan security agencies for operating on a template and branding every attack as Al-Shabaab without investigating each case on its own merit.

He is concerned that the Muslim community, especially Kenyan nationals of Somali origin, are getting perturbed by the ever perceptions that they are responsible for the growing security risks in the country, which in most cases lowers their ability to co-operate with the security agencies.

Anneli Botha, a researcher with ISS based in South Africa, who has done extensive research on the issue at the Kenyan coast, argues that in most cases, security agencies often miss the level of radicalisation among local Kenyans, Tanzanians, and Ugandan nationals.

She argues that the perception that extremism is limited to Somali or Arab-looking individuals is no longer valid. “Instead religious and or ethnic profiling is not only fuelling marginalisation and radicalisation, it also means that we’re completely missing the plot in case recruitment at places we’re not expecting it, making our counter measures not only counter-productive, but sometimes ‘useless’,” she said.

She argues that radicalisation is not limited to Kenya, Tanzania and Uganda, because when religion has been turned into an ideology, nationality doesn’t count at all. For instance, foreign fighters have answered the call to wage jihad in Afghanistan, Bosnia, Iraq, Syria and Somalia.

According to ISS report of April 2013, many Muslims in Kenya have harboured grievances against successive Christian-dominated governments, making it easy for young Muslims to join extremist groups

But instead, the region continues to present Somalia as the root cause of all problems rather than focus on the domestic conditions that those behind radicalisation exploit to recruit their followers.

Hassan Omar, the Mombasa Senator, argues that the common approach whenever there is any attack is to victimise the Muslim population and put it under intense pressure to prove their innocence

He instead proposes a broad-based platform for Kenyans to discuss terror-related issues instead of creating a situation that allows victimisation of one section of society.