Columnists
BY BENARD AYIEKO During the visit to Kenya by the first sitting U.S President in July last year, Barack Obama did not mince his words on the ‘role of women in economic development’ while addressing Kenyans at the Kasarani indoor arena. President Obama said that “the role of women in entrepreneurship cannot be downplayed…leaving women out of the entrepreneurial journey is like having a team but half of the team members are not allowed to play…” His conclusion is crystal clear – any nation that fails to educate girls is doomed to lag behind in the global economy. Education is the first step towards empowering women, you educate a woman; you educate a generation. Nations that incorporate more women in their development agenda are likely to enjoy sustainable economic growth and one sure way of achieving that is by promoting girl child education. Girls grow to be women who eventually educate their children to be successful in future. What does this emphasis on empowering women really mean to economies? Is there a positive correlation between women in leadership and economic development? Does bringing more women into the labour force benefit the economy? Could there be a positive correlation between the number of women in boards and profitability? Let’s delve into the crux of the matter together. President Obama being aware of the challenges that women go through as they climb up; both in the corporate and political ladder, made a wake-up call to societies that are still living in the traditional era where women are confined to domestic roles, to rise up and empower women so that they can realize their full growth potential. Last month, the world celebrated the International Women’s Day with a key message of “Planet 50-50; putting an expiration date on gender inequality”. What this means is that the desire to eliminate gender inequality is a global challenge even though developed economies have made significant strides towards gender equality than developing economies. Global statistics on women in boards and leadership shows that there is still under representation of women in development compared to their world population. A study by Kenya Institute of Management showed that more than a third of listed companies at the Nairobi Securities Exchange do not have women directors trailing parastatals and private companies. As late as last year, out of the 60 listed companies at the Nairobi Securities Exchange, only five women representing eight per cent were chairpersons compared to fifty five men-led boards. Another report by the Institute of Directors on “Women in Board Management”, banks and insurance companies have the lowest absorption rate of women on their boards compared to state corporations, professional associations and micro-finance organizations. By keeping women out of their boards and below the expected women representation – banks, insurers, parastatals, professional associations, micro-financiers and other organizations lose out on key benefits such as innovation, versatility and professionalism that boosts companies’ top and bottom lines. A phenomenon that President Obama likened to a team that leaves more than of its best players on the bench and expects to be crowned champions. 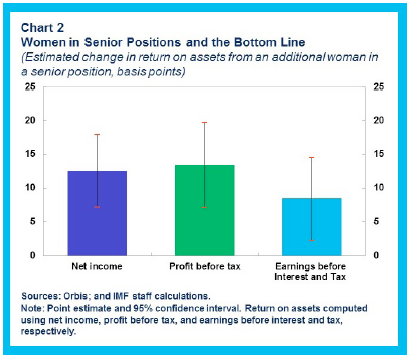 Research shows that companies with a high proportion of women board members score higher than their peers in financial performance, innovation and going concern. Women need champions to realize this gender equality dream. One such crusader is Christine Lagarde, IMF’s managing director who has distinguished herself as a global champion of women empowerment. She argues that women in boards are a great driver of growth for companies’ bottom line. The IMF boss aptly sums it up by saying that “women boost the bottom line for home, firm and country” and that economies will only realize sustainable growth through an all-inclusive process that focuses on gender parity than gender-neutral interventions.  A research by IMF staff covering 2 million firms in 34 countries in Europe found that having more women in senior management and boards boosts profitability. Specifically, the study pointed clearly to the fact that a company with one more woman in top management or in the board is associated with 8 to 13 basis points higher return on assets than one without. Questions arise – could the 55 companies listed at the NSE that have no women chairpersons on their boards be losing the 8 to 13 basis points return on assets?  Is it the reason why Standard Chartered Bank of Kenya with a woman board chairperson is performing better than her peers in the industry? Be the jury. But one thing is for sure, if you want to grow, involve women – they boost the net earnings for home, firm and country.