You probably have seen them on TV, or at airport lounges or read about them online or in glossy magazines. These globetrotting entrepreneurs, investors or businessmen straddle borders of countries, looking for another opportunity to set up a business and make more money.

They are suave, globally tuned-in, savvy and often politically connected. They are the first class members of the international rich, who are also known as the ‘plutocrats.’ They are the subject of Chrystia Freeland’s book, Plutocrats: The Rise of the New Global Super-Rich and the Fall of Everyone Else (Penguin, 2012).

This is a book worth reading, if not for anything but to envy how this 0.1% of the global wealthiest men and women in the world make their money, spend it and live a fairytale life. It is difficult to read Plutocrats and not feel hollow in the end. It is a brutal description of how a tiny elite is outpacing everyone economically. But it is a book worth reading – not just for the information but probably as some kind of provocation to debate the question of increasing inequality in the world.

Inequality seems to be a word that everyone knows today. Even school going children know that there is something wrong, that there is some kind of inequality, when the teacher in class constantly points at those in front of the class to answer questions to the exclusion of the ones at the back. Pastors preach about it every Sunday. Politicians use it as a magic wand to win elections, by convincing their voters that the reason they are poor is because the others want to sustain inequality by denying them a chance for redistribution of resources, and that, therefore, the politicians will rectify this problem. Even bankers are worried about it. The World Bank, of all the banks, cites it almost annually as a serious risk and threat to global economic growth and prosperity.

Yet when you read Plutocrats it strikes one that the superrich seem not to care. Of course they will give now and then to some charity or another. But that is simply what even the very poor do. The superrich are busy figuring out how to add another zero to their bank statements. They no longer talk of six figure earnings; they talk of seven figure returns to their remunerations, investments, or business deal. And these bank accounts are dollar or euro- denominated, irrespective of the country of their origin or habitation.

Speaking of which, the superrich do not necessarily belong to any one country. They hold multiple citizenships or have visa access to several countries. They may be natives of Congo but have their main investments in Paris whilst they live in Brussels, and the children attend school in London. These are not necessarily individuals who have grown into ‘old’ money, which tends to be domiciled in a single city or country. Consequently they aren’t necessarily aged. 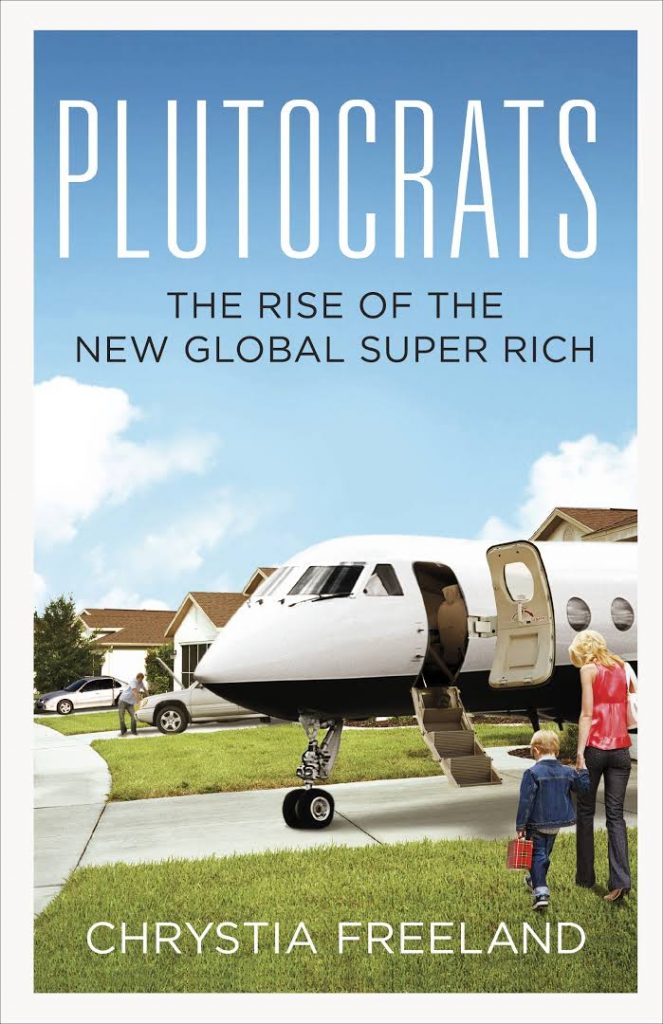 Plutocrats could be an inventor, an investor, an entrepreneur, a consultant etc. They, therefore, aren’t necessarily drawn from the old pool of professionals although they may as well be professionals. So, an investment banker who has struck it rich by making the right decisions may grow exponentially rich simply because he is good at risk analysis and investment making. A doctor specializing on diseases that afflict the rich and sets up a specialized, exclusive and private hospital could make a kill, literally. And so would a high-end lawyer, advising on a multibillion-dollar project also end up with millions, soon to be billions because her investment banker is making the right decision for her.

Thus, because of global connectivity, which has allowed seamless communication and financial flows between different corners of the globe, plutocrats can transfer their money quite smoothly. And in a world where money literally buys anything they can purchase residence, citizenship, invest in their new domiciles and make more money. The world is theirs, and they are of the world in ways that were previously unimaginable.

Plutocrats, Chrystia Freeland suggests, have mainly made their money legally. They are generally business people in the ordinary sense of the word. Or investors, like any other person who buys shares in publicly listed companies. Or individuals with highly sought after skills and ken, or individuals who do very risky work, for which they charge expensively. And because the way the financial system is set today, one can endlessly multiply their money – or make serious losses – by investing (often speculatively) in any part of the world, these individuals can grow dizzyingly rich.

There is a tendency, then, to assume that plutocrats are merely hardworking. Indeed they are hardworking. But why should they be allowed to grow superrich? Is it necessarily a good thing that 0.1% of the world population may live in such amazing wealth, spending in a day the equivalent of what ordinary households spend in months, while a majority of the remaining 99.9% of the world population is starving, afflicted with diseases, illiterate, jobless and faces a bleak future? Granted, these people may have earned their money, but aren’t they obliged to pay more taxes, which should fund the provision of social goods?

Should tax regimes in any country really allow the superrich to live their fabled lives whilst millions of other human beings wallow in poverty? Should plutocrats be allowed to ‘make’ their money in one country and stash it away in some tax haven so that they can enjoy their wealth without being disturbed by tax collectors in their country of origin?

But even if one ignores the legal question, shouldn’t the superrich be morally obliged to ‘give’ more to the poor or invest in social entrepreneurship? There is no reason to begrudge someone who has made his or her money licitly, but there is something socially abhorrent in the manner a majority of plutocrats live whilst being served by people who can only dream of such a life, without the possibility of ever attaining it.

The writer teaches at the University of Nairobi