Enterprise
BY CHRISPINE JUMA The lake region, particularly Suba, is known to be an area that experiences excess rainfall and also goes through devastating dry spell and people have to walk several kilometers to get water from the lake. However, there is a new light for people who come from this area, watermelon is doing pretty well in the place. Investing only Sh20, 000 on a one acre piece of land, Gad Aguko, a 24-year-old Kenya School of Law student managed to sell the produce to a tune of more than Sh200, 000 in his first ever attempt last November, having planted in August. Planting in August and harvesting in November was somehow normal, however, making Sh180, 000 out of the trial investment was never expected. Watermelon seeds are slightly expensive with 250g going for Sh6000. Then there is the use of insecticides, which cost him around Sh4000. Labour and the Nairobi – Homa-Bay, Lambwe Valley travels also cost him a little. Timing the rains was Gad’s main problem. Rains in Suba, and particularly in Lambwe valley are so unpredictable. He however got it right and from the results, it sure was not his last. He will plant again. Settlers of Lambwe valley could earn a living without heavily depending on the livestock, as is the case, which is adversely affected by the tsetse fly. Lambwe valley has a rich soil that most settlers have not ventured to exploit. The grassing fields are available but the efforts to do away with tsetse fly have proved futile, posing the greatest threat to livestock keeping. As at now, many farmers are excited with the law student’s idea and will be experimenting with it. 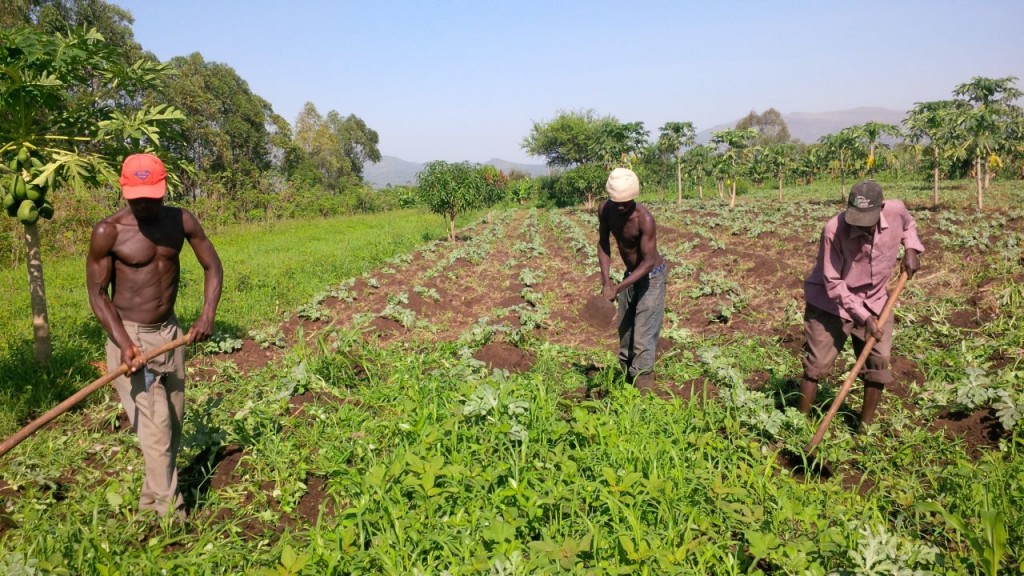 Ironically, it’s Homa-Bay’s scorching sun that provides an available, local market for the produce, with the people thirsting to quench their throats. There are those who do blending of fruit juices. These ones mostly come from Kisumu City, braving the two-hour road travel for the melon. Yet another market is in Nairobi as there are those businessmen willing to travel for the more than the 300kms for the fruit. Fetching Sh50/kg, a single fruit, which on average weighs between 6kg and 10kgs fetches about Sh350 on average. The Lambwe Valley melon, owing to its fertile soil and the natural sunlight, if timed well with the rainy season is too sweet. Farming in this Valley does not need any fertilizer; the soil is naturally rich in nutrients. It is probably what explains its demand both in Kisumu and as far as Nairobi. Watermelon takes three months to be ready for consumption. From the day of planting it takes six days to break above the soil. After two weeks, it is ready for the first weeding. After another two weeks, you do the second weeding. In the second month, the plant begins to flower, at which stage, insecticides is sprayed to keep off bacteria. The moment the fruit formation begins, another spraying is done. At the end of the three months the fruit is ready. However, the fruit must be handled carefully during transport because the moment it gets poked the water oozes out and it becomes a waste. Land should not lie idle. No land is unproductive when it comes to agriculture. There is enough evidence that farming can do well everywhere. It may not even require huge amounts of wherewithal. All one needs to do is identify which crop suits the soil, follow rain patterns and work with determination and the results will not let you down.