Cover Story
By Benard Ayieko The scorching sun in Nairobi has risen to unprecedented levels. The heat is just unbearable – day and night. Kenya’s capital is visibly busy with citizens trying to eke out a living perhaps oblivious of the financial trends in the global economy that could slow their personal financial growth. What is clear to everyone and especially those working in the informal sector is that the cost of living has risen significantly and it calls for more hard work to meet your usual basic needs. A consumer basket for a nuclear family of three has shrunk significantly in the last few years. To balance the growing consumer needs against stagnant personal income, households have opted to cut down on goods that make up their consumer baskets. If not, they have resorted to consume what economists call ‘inferior goods’. So much so that in a cluster of goods say soft drinks, you resort to consume a soft drink with the cheapest price on the shelf. Same applies to foodstuff; instead of high grade sifted maize flour that costs almost US$ 1.5 for a kilogram, households have opted for the low grade unsifted posho mill maize flour that costs less than a dollar for a kilogram. I could go on and on to show you how Kenyans have tightened their belts even though they have folded their shirts. Economic analysts point to a problem that could be bigger than the dictates of the local economy. Some analysts are so skeptical to an extent that they think that these pointers are salient features of a global economy that is sliding into recession. There are numerous economic fires in almost every corner of the world. But where are the firefighters? Look at the economic bust in Latin America – Brazil, the largest economy in the region is slowly grinding to a halt for various reasons. Other recent global occurrences point to a global economy that is under siege. In some areas, even though things are moving forward, the slow-pace is worrying. The American election has also thrown the world into a chill mode. The race is shaping up and looks likely that the democrats will have Hillary Clinton as their presidential flag bearer while the republicans are moving closer to handing the mantle to Donald Trump. Mitt Romney and others who share his views cannot fathom a Trump presidency. But take a deep breath, America remains the only country full of surprises – they say it is a land of opportunities. I leave it to the Americans to decide on Tuesday, 8th November. The genesis of forecasts on the global economic recession gathered momentum last year when IMF reports pointed out that global growth in 2015 heading into 2016 will experience a slow puncture making the global economy to slide into its slowest growth rate since the recession of 2008. The report further explained that $3 trillion corporate credit crunch was looming as debtors face a challenging future. It also points to a ‘triad’ of global risks that could eventually push the world to the brink of a new financial crisis with greater ramifications than before. ] 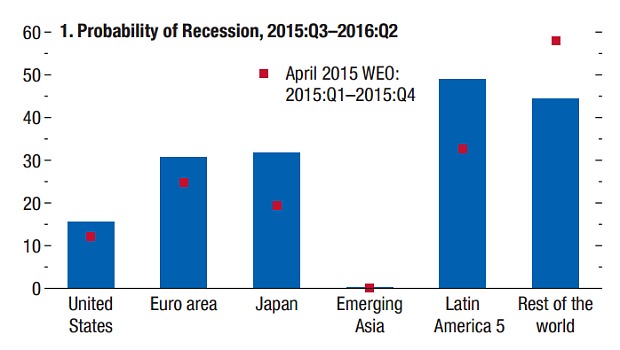