Enterprise
BY VICTOR ADAR When Jacinta Ngina quit her job at Co-operative Bank in June 2012 to start farming in mid July of the same year, people around her thought it was a wrong move. It went like she was not cut for it; leaving an interesting profession for farming was a bit off for her colleagues. But she chose not to stay put in a field where she was likely to be exploited especially in terms of pay package. “I figured I could make more money if I was self employed,” she says. “From the little I’d seen while in employment the people with financial security were not bankers… farming seemed sustainable, people have to eat.” Her enthusiasm for a sector that many young people frown at is so solid that Ngina does not worry about the story of quitting a job many Kenyans know as plum. She is just one simple lady who based her decision on the fact that bankers are “broke” people in town. 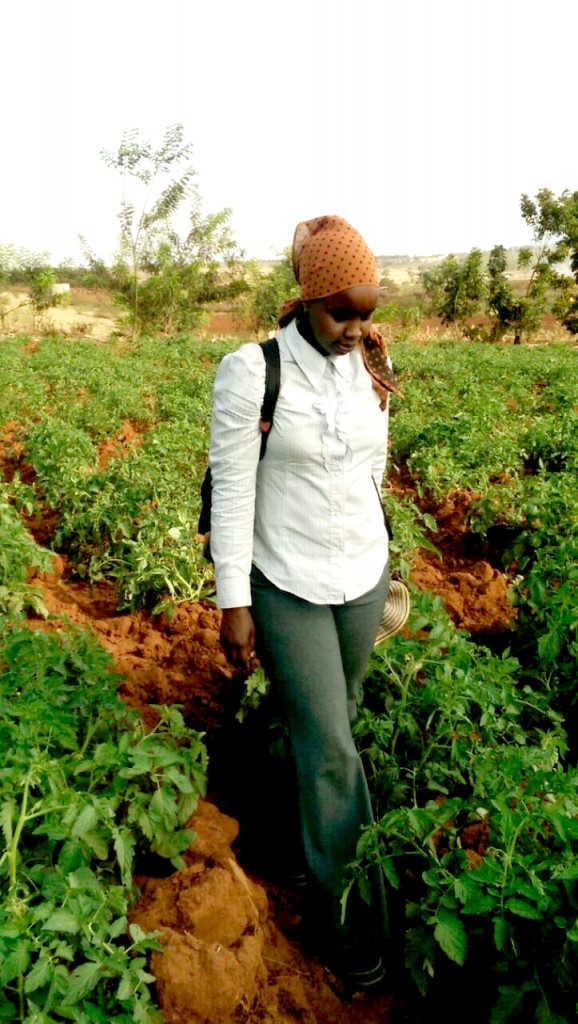 Ngina started off on a 2-acre piece of land, injecting a capital of Sh500, 000 at the beginning of the horticulture project; growing tomatoes and French beans big time. And with proceeds from the first harvest, she expanded to 5 acres. Her farm, Ella Farm Fresh, is based in Kilimabogo, which is along Garissa road. “In a year’s time I had broken even and expanded to 15 acres. And in 2014 I was able to secure funding from youth fund to allow me to change my irrigation system on nine of those acres.” She knows too well that how to supplement income is a dilemma for those with 8am to 5pm jobs, and is confident that she put her best foot forward and things are clicking. Her financial status has changed significantly as compared to when she was in a full time employment. Although memories of how one senior manager tried to convince her not to quit is still fresh on her mind, she is grateful for where she is now, jumping into a lucrative venture that many shy away from. Indeed getting dirty is seemingly proving good business. And she has accolades to show for it. BASF East Africa Limited, a company working with farmers to keep the soil fertile and fruitful with the right amounts of water and nutrients, stewarding the land and planning for the future, had a good reason to award her during last year’s National Farmer’s Awards. It is for the farmers that BASF came up with away to award smart farmers like Ngina, a lady who is flourishing a time when youth unemployment and high cost of living is biting. Lengthy and rigorous requirements are some of the challenges cited by young people when it comes to securing loans. But this young lady is encouraging other young people that they no longer have to make do of complexities of “youth unemployment” on the basis of stringent requirements (and take a back seat simply because it is not easy to access loans) arguing that it is better to be your own boss. You can start (small) your own business and run with it. If your passion is farming, just do it, she says. Despite the many highpoints, she says challenges abound. A farmer may make a lot of money in a particular season when there is a scarcity of a particular commodity, only to lose most or all of it during a glut in the next season. “This is something that every tomato farmer can relate to following the recent 4 month glut we have just experienced, and indeed prices for most farm produce have been at an all time low.” In 1960, the total agricultural areas were 4,300 meter square per (msq) head, in 2005 it shrunk to 2200msq and by 2030 it will shrink further to 1800msq. Still, as the world grapples with the challenge of producing sufficient food to feed a ballooning population estimated at 9 billion by 2050, farming is arguably becoming the best option. What these figures mean, though, is that the same parcel of land, has been feeding more people – population grows, land does not. That is why BASF (which has played a major role in the rise of Ms Ngina) is supporting farmers to access innovation, solutions and experts to enable them to improve productivity, increase efficiency, and stay at the cutting edge of their profession ensuring growing demands are met, year after year. In fact, one of the drivers of Agriculture that people are green about is technology, without which food production actually becomes very problematic, especially when farmers use old methods, which failed for decades. In farming too, a little creativity is important – as Kenya’s agricultural land continues to shrink. “It is hard to reconcile this, to news that certain parts of our country are experiencing drought. I’m sure you will agree that something can be done about this… something should be done,” says Ngina, explaining why it is tough making things happen without meaningful partnerships. An index by the International Food Policy Research Institute has established that Kenya is among 50 countries where levels of hunger remain serious or alarming, with one in every five Kenyans being undernourished and one in four children being stunted, putting the country marginally ahead of conflict-prone Iraq. Ngina is surprised by this worrying statistics, and calls upon the government to help entice people (especially the young) into farming. “We need partners in various capacities to walk with us,” she says.