Technology
Thirty-five percent of Africa’s population is between the ages of 15 and 35 years[1]. They are growing up in a more connected world—with mobile phones, access to the internet, and engaged in social media. As these connections become more commonplace, GeoPoll polled more than 4,000 youth to understand their perceptions on social media, Internet regulation, and free speech. The first two segments of the analysis digs into the youth’s perception of their rights and the role of government with regard to free speech and social media. Surveying youth in Ghana, Kenya, Nigeria, South Africa, and Uganda, 85% of respondents stated that they consider free speech online a human right. On rating their countries on free speech on the scale of very free, somewhat free, neutral, less free, and not free, 65% of respondents found the level of free speech in their country to be free (38% very free and 25% somewhat free). Only 14% of respondents find the level of free speech in their country to be less or not free (10% less free and 4% not free). Among the five countries polled, 64% of Ghanaians reported “very free,” the highest level among all countries. Conversely, Nigerians and Ugandans made up two-thirds of all respondents who indicated less free and not free. GeoPoll then sought to understand perceptions of free speech as it relates to social media. Among the 4,213 respondents from all five selected countries, 17% of respondents indicated they posted more than 20 times a week on social media, 10% noted they posted to social media between 11 and 20 times, and 28% said they posted to social media between 6 and 10 times per day. Forty-five percent of respondents said they only posted to social media less than 5 times a day. Ghana (20%), South Africa (19%), and Uganda (19%) had a larger share of respondents who post on social media more than 20 times per week when compared to Nigeria (16%) and Kenya (14%). When asked if one has shared or shares their political views on social media, GeoPoll found respondents split nearly down the middle. Fifty-four percent of respondents said they had not/did not share their political views on social media, while 46% said they had or did. Out of the five countries surveyed, Nigerian respondents are more likely to share their political views on social media (51%) compared to their Ghanaian counterparts (31%). In an earlier nationwide survey among youth in Kenya, 34% indicated that they use social media to address issues affecting them; however, they fear reprisal for their outspokenness with 59% sighting their safety as a motivator that would help them take action on important issues. 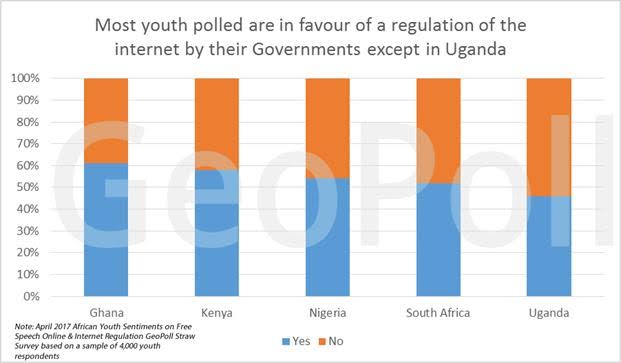