In this rat race of life, it is easy to confuse activity for productivity. You may have heard the story of the moth that admired a plant growing at the centre of the flower vase it lived in, every time this moth went round the clay pot, it assumed that it got closer to the flower only for it to one day die of hunger after it was not able to feed on the plant. Many people yearning to be wealthy are doing the wrong things like purchasing liabilities to fill up their houses and lifestyle and end up living from one paycheck to another.

An asset is simply a flow of income into your asset box; it puts money into your accounts even if you stopped working for example, income generating real estate or dividend paying stocks. While those who earn salary have what we call earned income, the wealthy have gotten into the habit of generating a second flow of income called passive income. This empowers them the luxury to have money work for them. It is a new source of income separate from their daily hustles. By having this stream, passive income, they are free from the ‘slavery’ of earned income unlike the poor, middle class and the rich.

The wealthy have a lot of money flowing out of their asset boxes including liabilities, which include bank loans, credit cards with outstanding balances and home mortgages. Question for the earned income is, what if you were to lose your monthly pay, would you continue to earn from your mortgage or will it demand a continuous payment irrespective of the fact that you lost the job?

It is the liability box that makes many people broke, if you stop earning your income, the liabilities are a constant and they eat into your savings to a point of leaving you broke. The rich, middle class and the poor suffer big time in times like this for lack of having passive incomes and that’s where the wealthy have learnt to cushion themselves.

In the chart above assets (c) and Liabilities (d) make up the Net Worth of the wealthy. The block arrow shows how the wealthy use their passive income to cater for their liabilities unlike the rich and middle class (thin arrows) who use their earned income for the same 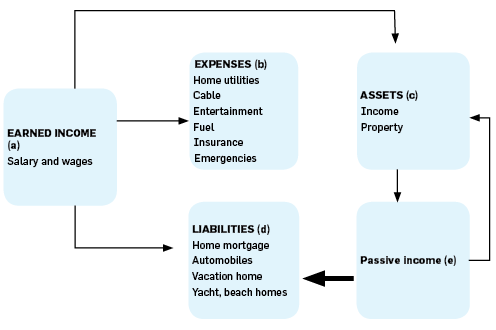 While the rich and middle class earn money through huge salaries for that matter, the purchases they make are very different compared to the wealthy. Looking at the liabilities (d) in the above diagram, personal automobiles, home mortgages are some of the indulgences of the rich and middle class. All these are things that deplete the assets and income.

On the contrary, the wealthy, who are extremely big spenders are a little more prudent in their purchases. They put their hard earned money into activities that earn them money first, for instance, in rental houses income, dividend paying bonds. This new pool (passive income) alongside the asset box over a period of time creates a self sustaining stream of income separate from their earned income and thus affords the wealthy all the luxury of living large and without the care of a salary. Never mind their living expenses and liabilities are big but this is countered by their equally bigger and constant flow of income.

Rent they get from their property or dividends from the stock market can be used to settle most if not all their expenses and thus income (passive and earned) can now be used to purchase other income generating assets to continue the flow of income.

Financial freedom the wealthy enjoy is a result of shrinking the liability box through smart purchases (money making) and growing their asset boxes unlike the rich and middle class who purchase items that fill up (expand) their liability boxes and drain their income fast. The latter group as illustrated in the diagram above also lacks any money flowing into their asset boxes and so a salary delay or termination plunges them into a financial crisis.